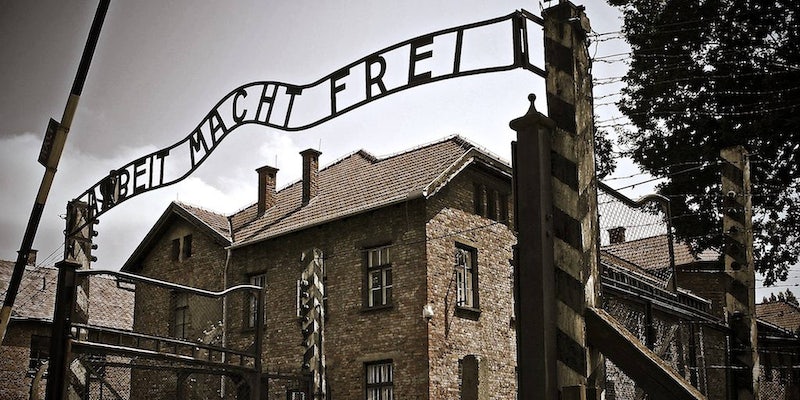 In defense of Holocaust selfies

If smartphones had existed during the Civil War, would there have been selfies?

On July 21, 1861, men and women of all ages and classes gathered on a hill not far from Manassas, Va. Some had worn their newest clothes, sure that anyone who was anyone within 100 miles of Washington was sure to be there. Nearly all had brought picnic lunches, and the crowd grew so thick at one point that a spectator, writing later in the New York Times, complained of having his opera glasses borrowed by at least three women.

They were there to watch Union and Confederate forces meet—and meet decisively. Anxious about what a fractured Union might mean not just for society as a whole but for themselves as Americans, the crowd (virtually all of whom were northerners) wanted to see the South routed—if they could watch, with their own eyes, touch the soldiers with their own hands, wouldn’t that be enough to make the whole mess make some kind of sense?

I, thus, have a question to pose:

If smartphones had existed during the Civil War, during what would become known as the First Battle of Bull run, would there have been selfies? Would, after the fighting proper was over, and bodies lay strewn on the grassy fields, those well-dressed men and women have dashed out into the clearing to get snaps of themselves posing next to bullet casings and bloodied grass?

Yes, reader. I believe they would have.

Much has been made in recent weeks over the selfie’s emergence in seemingly unlikely spaces—the 9/11 memorial, Auschwitz, even at funerals, grandma’s frozen face preserved for all eternity by talented embalmers and Snapchat.

This, the narrative goes, is bad. Selfies in serious places take away from the seriousness of those places and those moments. It’s the worst form of narcissism, a way to loudly position the self at the center of sites and events we’ve collectively decided are for silent contemplation. It’s technology brashly interrupting human existence—where once we were reverent, now we make duck faces.

The problem with this theory is that it is bullshit.

For human existence, for as long as we’ve been recording it, dealing with horror and tragedy and grotesqueries large and small has been achieved primarily by acting patently ridiculous.

In the mid-late 19th century, death lurked around every corner. 1 in 10 New York-born infants didn’t live to see a first birthday. Diseases we now think of as minor inconveniences, like the flu—the flu!—killed hundreds upon thousands of people. As cities could no longer make space for their dead, and the living no longer wished to remain in close proximity to bodies, the rural cemetery movement arose—graveyards a safe distance from any place people were wont to live, where elaborate monuments and intricately landscaped gardens could serve as sites of remembrance for loved ones wondering why they, of all people, had been spared.

And when these cemeteries were built—Mount Auburn in Boston, Green-Wood in Brooklyn, Woodlawn in the Bronx—do you know what our solemn, decorous ancestors, the ones we believe would’ve been horrified by funeral selfies did?

Loud, messy luncheons with spiked lemonade and sandwiches and fancy hats just in case they wanted to promenade and flirt, which is something else that happened in cemeteries with no one batting an eyelash. Turning space meant for mourning into a space for living, even living in a way that might seem indecorous, was a way to say: we’re here. We’re here and we’re alive.

It isn’t just Americans who found the need to assert vitality in the soberest of moments. During the French Revolution, Parisians lined up to see the waxworks of Madame Tussaud—waxworks modeled on heads that had been, until very recently, attached to the bodies of people like the King and Queen, people whose divine right was supposed to keep them safe. The most popular of Tussaud’s creations boasted trinkets and tokens taken from their models—a bloody shirt here, a jeweled necklace there. Sure, some of the gawkers might’ve been themselves swept up by the revolutionary spirit, eager to see the once mighty torn down to the level of the rest of us, but just as many went because spectacle, the word that most accurately defines Tussaud’s, was and still is a way to feel present—to create, in a way, order from chaos.

The selfie, I think, is just a technologically different way of creating and participating in spectacle. Whether taken at work or school or in the vicinity of One Direction or at the funeral of a loved one, it’s nothing more than a new way to do what we’ve always been doing—asserting that we are here despite every effort of the universe to make it the opposite.

It’s especially poignant now—we are living in an age when the spectres of death and decay are everywhere (surely I am not the only one wondering if the low-level dread in the pit of my stomach is terminal) and yet we are wholly removed from the corporeal aspects of these things. How many people, in 2014, die at home? How many selfie-taking high schoolers have breathed the same air in which something that has ceased to do just that rests? How many of them can conceive of war, of genocide, outside the context of the AP European History exam? Really, what choice have we given them? What else are they to do aside from turn the camera around and say, “Look! Look at this awful thing and then look at me standing next to it?”

If anything, the fact that young people are seeing things they can’t even begin to understand and responding by planting a digital “I was here” flag is comforting. For what of the alternative? What of the youth who visits a graveyard or a monument or a space full of the darkest, most difficult histories and shrugs? “I don’t need to take a selfie here,” this nightmare teen of the future might as well say, “This place doesn’t matter at all.”

Angela Serratore is the Deputy Web Editor at Lapham’s Quarterly. Her work has appeared at Smithsonian, the Paris Review Daily, the Awl, and elsewhere.

Photo via pciaurriz/Flickr (CC BY 2.0)