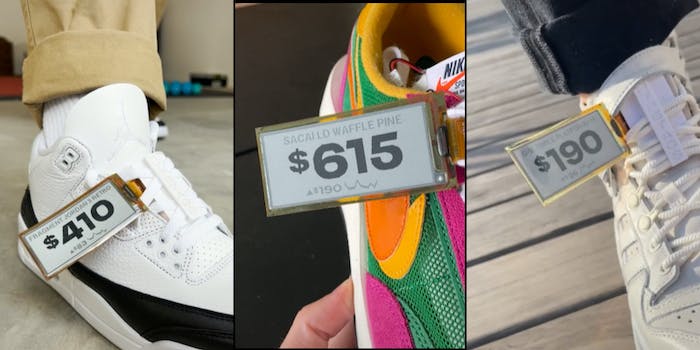 ‘What stage of capitalism is this’: People hate this high-tech pricetag for collectible sneakers

This gadget provides live updates on the value of your sneakers.

Would you wear a pair of sneakers with a visible pricetag, showing everyone their value as a collectors item? Known as “Hypetags,” this product is going viral on TikTok. It’s almost certainly a parody of consumer culture, but many people are taking it seriously—and they hate it.

Hypetags were invented by TikToker @lanewinfield, aka Brian Moore, who has created a few other semi-facetious tech products including a webcam for shoes and an app that reminds you to stop touching your face. Hypetags look like a pricetag with a digital screen, providing live price updates from StockX, a popular sneakerhead webstore.

“After paying way too much for these shoes, I realized there was no way non-sneakerhead normies would know how valuable they were,” says Moore in the TikTok’s voiceover. “So I had to figure out a new way to flex.”

These tags satirize the sneakerhead habit of keeping the StockX tag on their shoes. It’s a visible statement of authenticity for collectible shoes—and by extension, a symbol of monetary worth. However, a lot of people think that keeping the tags on is extremely corny.

The response to Hypetags was overwhelmingly derisive. “What stage of capitalism is this,” reads one of the top comments. “i see you wearing this im stepping on your shoes,” reads another.

Others described Hypetags as “pretentious bs” and “weaponized cornballery,” and a couple of people pointed out that a visible price tag is basically an invitation to get mugged. Moore replied that he wears $3 Crocs outdoors, keeping his expensive sneakers at home.

The sneakerhead community was not very receptive, with TikToker @snkr.kingdom posting a response saying, “If this every actually became a trend, I would stop being a sneakerhead. It’s not about the price!” Meanwhile @cyberexboyfriend had a lengthier response explaining why “StockX ruined sneaker culture.”

The original Hypetags TikTok has been viewed almost a million times in one day and has already spread to Twitter, where it’s getting a similar response: “it takes time and extensive research to make something this whack.”

Most people seem to be taking Hypetags at face value, because while they may have been invented as a joke, they still feel like a product that some collectors would want.

The Daily Dot has reached out to @lanewinfield for comment.