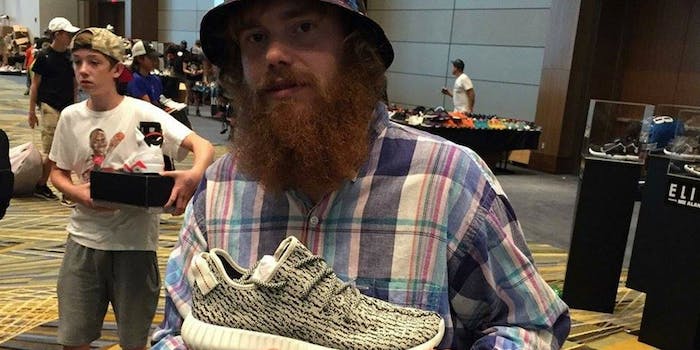 'If I don’t get a kidney from this post, but 20 other people do, that’s enough for me.'

A free pair of Yeezys is any Kanye fan or sneakerhead’s dream, but for what price?

Matt Neal, 26, suffers from IgA nephropathy, also known as Berger’s disease, which slowly destroys kidney function over time. Neal says he contracted the disease “in one of the rarest ways possible,” after an untreated case of strep throat in third grade. But his luck might be turning around: He won a pair of Yeezys in a raffle.

On a whim, he posted in a sneakerhead group on Facebook. 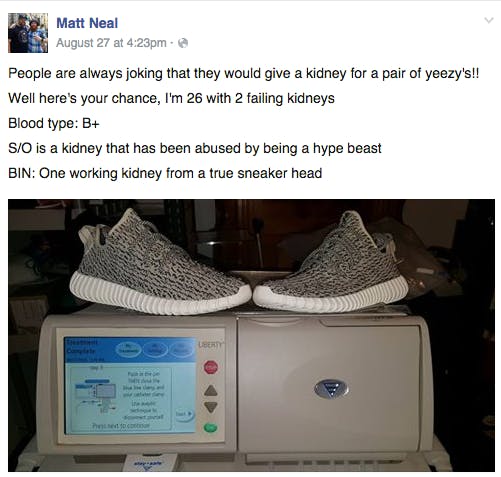 “It started off as a joke,” he told the Daily Dot. “But then within an hour it was not a joke anymore.”

Since posting on Aug. 27, he’s been getting overwhelmed with responses and offers.

“I can’t believe the love and support I’m getting from random strangers,” he said, then added: “The thing is, trading a pair of shoes for an organ is illegal. You can’t give someone incentive to give you an organ.”

Most of the people who have gotten in touch with him don’t care about the sneakers: They just want to help and happen to have the same blood type as Neal. “I’ve also had people message me and ask what size the shoes are because they might be interested,” he said. “And they’re dead serious.”

Neal made sure to emphasize that he’s “more focused on the lifelong bond I’m going to create with this person, and if I give them a gift for giving me an organ after, that’s between me and them.

“You can live a perfectly good life with one kidney.”

The post ultimately serves to spread awareness. Neal explained that people constantly joke about trading their organs for a pair of the coveted shoes. “Most people don’t know how many individuals in this world aren’t organ donors,” he said. “And by becoming an organ donor, you can save a life. That should be enough for someone to put that on their driver’s license.”

Neal has now connected with many others in his situation—on dialysis with two failing kidneys, waiting for a transplant.

“They didn’t have a pair of Yeezys to make their post go viral,” he said. “If I don’t get a kidney from this post, but 20 other people do, that’s enough for me.”