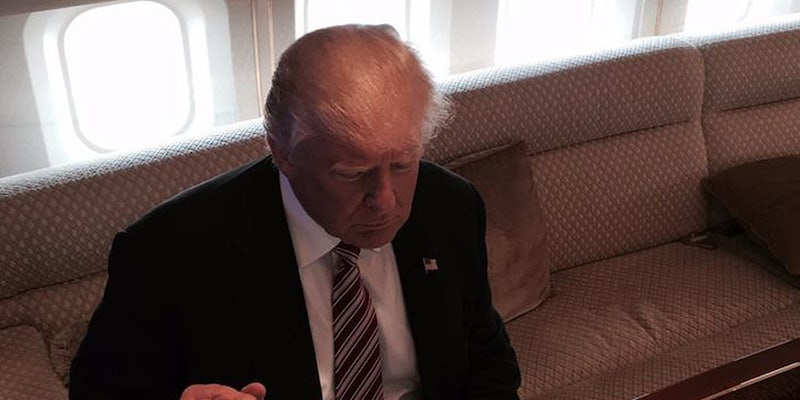 Here’s how you can tell which tweets Trump writes himself

The Android ones are significantly 'angrier.'

Many people are saying there’s a distinct difference in tone between two sets of Donald Trump tweets—the ones the candidate writes himself, and those that seem to be written by staffers or handlers.

But how can one know for sure which are which, especially when the staffers sometimes attempt to write with Trump’s unique bluster?

Here is one theory:

Every hyperbolic tweet is from Android (from him). pic.twitter.com/GWr6D8h5ed

David Robinson, a data scientist at Stack Overflow, ran Trump’s tweets through a text analysis and discovered there really is a difference between @realdonaldtrump’s Android and iPhone tweets.

“The Android and iPhone tweets are clearly from different people, posting during different times of day and using hashtags, links, and retweets in distinct ways,” Robinson wrote.

Robinson also ran a sentiment analysis that seemed to confirm the conventional wisdom about Trump:

“What’s more, we can see that the Android tweets are angrier and more negative, while the iPhone tweets tend to be benign announcements and pictures,” he wrote.

Aside from the times of day—the Android tweets tended to cluster in the mornings—Robinson identified Trump’s use of “manual retweets” as a big giveaway. The Donald loves to paste other people’s tweets and put quotation marks around them instead of just hitting the retweet button.

Robinson’s conclusions are especially plausible when you consider that a 2015 New York Times piece on Trump’s Twitter habits identified him as using a Samsung Galaxy, an Android phone. The article painted Trump as someone who takes glee in composing his own tweets and pride in provoking a high volume of replies.

But he’s also said that he sometimes dictates tweets to staffers. Who’s to say some of them aren’t using iPhones?

The Atlantic took the analysis one step further and determined that the number of Android tweets from @realDonaldTrump has decreased as the race for president has dragged on. “Is Trump’s campaign locking him out of Twitter?” wondered Andrew McGill.

“Trump is indeed sending fewer tweets from the Android device. He posted an average of 371 tweets per month from July through December; that average is down to 200 per month in 2016, not counting August,” he wrote, “The iPhone’s tweeting has also ticked up substantially.”

Has the man who once boasted of being “the Ernest Hemingway of 140 characters” really turned over his favorite hobby to campaign staffers? That doesn’t sound like Trump as we understand him, but the numbers certainly provide some food for thought.

If Trump gets elected, though, the question will be answered once and for all: He says he’ll stop tweeting.