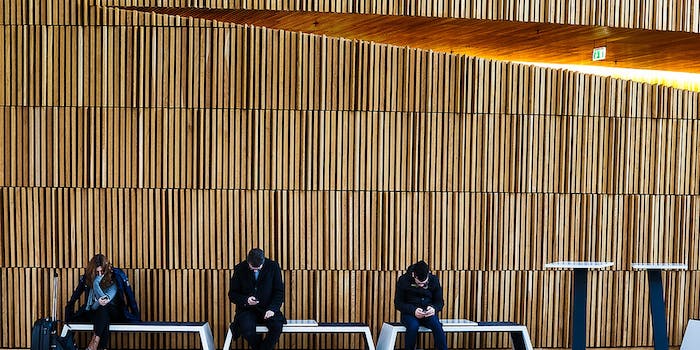 How to own your relationship with technology

We are becoming subordinate to these systems when we should be benefiting from them.

The year was around 400 B.C., and the research scientist relating this information was Socrates. He was talking about the danger of writing things down. This, he told us, would “create forgetfulness in the learners’ souls, because they will not use their memories.” At the beginning of the 21st century, we’ve survived the printing press, the digital calculator, and the birth of the Internet (Slate actually has a pretty good retrospective of our tech anxieties here), but we have an escalating anxiety about what technology is doing to our brains. Same problems, different millennia.

As much as we have an ambivalent relationship with our 24-hour email and our wearable smart-devices, this anecdote reinforces the fact that new technology is not something which “goes away”?—?it’s very hard to un-discover something. The wheel happened, the telephone happened, the aeroplane happened, and the Internet happened. Some people were miffed at first, but in each case we had to deal with it.

If we look at today’s advances?—?always-on Internet, connected devices, and technology integrated with our bodies?—?it is happening, and in some cases has happened already (think Google Glass, prosthetic eyes, and that smart fridge which keeps threatening to text us when we run out of milk). We can’t run from it, but as consumers and builders of apps, networks, and devices, we do get to choose whether we want to design systems that make us slaves to the exponentially increasing onslaught of data (the photos, likes, and notifications), or systems that give us ownership, and which let us filter out the noise in search of what is actually meaningful.

When we think of how technology affects us in our free time, we should be designing (and using) it in ways that add color and depth to our lives. In the same way that an exotic vacation, a great book, a great movie, or even a video of a mother duck saving her ducklings from disaster can enrich the way we interact with the world, the means by which we interact with information and people online should be enriching.

The way the Internet has opened up and democratized access to knowledge may be the most profound development in the history of man, but right now?—?let’s be honest?—?we’re not doing a great job of building things that make us happier in the long term. The news media is awash with stories of urban isolation, unending work lives, and social network narcissism making us feel more busy and less fulfilled. Facebook’s recent experiment on how the content of their news feed impacts users’ emotions reinforces the concern about the impact our social networks have on our mental health.

We’ve been conditioned to think that noise is what is meaningful—almost literally. We count the volume of retweets as a measurement of the value of what we share, rather than what it meant to us or anyone else. Instead of “owning” our technology, or even “owning” the things we communicate, the platforms we use subjugate us to the role of disseminator of information. They have unfortunately been designed to maximize sharing rather than providing people with meaningful information or interactions, and if we look at the wasteland that is our Facebook news feed, I think we can agree that the cracks are starting to show.

So what are we saying, that we should build our technology without making it easy and fun to share? That doesn’t sound like a very good idea. What we’re saying is that we have to shift the value of what we use technology for from the means to the end. As the hard things become easy (remember, it used to take weeks to get a message across the world, now it takes microseconds) we have to focus on championing human creativity?—?the human-made images, stories and videos we share?—?rather than the people who can maximize their dissemination. The systems we build (whether they’re digital, like Facebook, or physical, like your local law enforcement) shape human behaviour en masse.

As more of our life becomes digital, we have to design with value?—?rather than volume?—?in mind.

I wrote a couple of months ago about the poison chalice of ad-subsidized content?—?how making everything free for the public erodes quality in the long term, and how paying makes it better. Add to this the ease with which anyone can create a GIF or a video, the ensuing deluge of content (100 hours of video uploaded to YouTube every minute), and the end of traditional “curators” (TV channels, record labels), and you can see that we have a big social problem.

We’ve been used to a heavily filtered stream of information and prefer strong signals as to what’s valuable and what isn’t?—?the recent swing back from sprawling, Cheesecake Factory-style menus to short and selective ones in our restaurants is a strong analogue in exploring how we prefer to make choices. Online, we rely almost exclusively on what is “buzzworthy” or the most-shared for our curated lists, and it’s painfully obvious that link-bait tactics and billions of advertizing dollars are quite capable of tipping otherwise democratic scales.

We need better indicators of quality content than just what people are clicking on and sharing.

We give our memories, photos, everything we can digitize to the Internet, as well as millions of years of our collective lives. And what we have right now is not an organic or value-focused way to interface with it. We have big rectangular windows that physically separate us from the content?—?our TV, tablet and smartphone screens?—?and such an unfiltered firehose of information vying for our attention that our spongy minds are burning out (check out increasing body of literature on “information overload“).

Put simply, we are becoming subordinate to these systems when we should be benefiting from them.

So how do we “own” technology and use it in a way that adds value and color to our lives, rather than being a burden? How do we move towards a world a bit more like the design aspirations of Her, where our interactions with technology are inherently more human, and where any technology we aren’t using is hardly noticeable as a device, a screen or a piece of “hardware?”

The first step has to come from the people building the systems that aggregate and provide content to us. Current signals of value?—?like the volume and speed of retweets or likes?—?are broken, and our Stockholm syndrome relationship with Buzzfeed and Facebook is indicative of an abusive relationship. We lament the crass content, formulaic headlines, and self-aggrandizing selfies, but spend ever more time sharing and “engaging.” New models, like State or Secret, are using aggregated human opinions, and thoughtfully building networks to provide high quality and personally relevant content, and have huge potential in helping people to “own” the systems they’re a part of to enrich their lives.

This is something we’re also trying to solve at depict?—?mixing raw usage data with the instincts of expert curator to provide visual content that resonates with love?—?but our mission also extends into the second part of the solution: turning screens from digital eyesores into technology that enriches our homes and lives without intruding.

Repurposing TVs, tablets, and phones to be more organic media for high quality content is just the first part in our journey. It’s evident that in the long term we shouldn’t need to carry around a tablet the size of a small brick just to read the news or hang something the size of a television on your wall to be able to decorate your home, but bringing amazing visual work to these devices, which we all have right now, is a powerful way to start thinking along those lines.

We’re part of a hive-mind movement across art and tech that is trying to humanize the ways we engage with technology and turn that fire-hose of information into something we don’t just consume, but which surfaces cultural value?—?the thoughts and creative work that make it fulfilling to be human.

Ben Wallace is the VP of Marketing at depict, where he is building a community for people to discover and collect digital artwork. Formerly he was at Google, heading up Android hardware marketing across Europe, and leading Marketing internationally for Google’s Politics & Elections work. You can tweet him at @bangwallace. This article was originally featured on Medium and republished with permission.