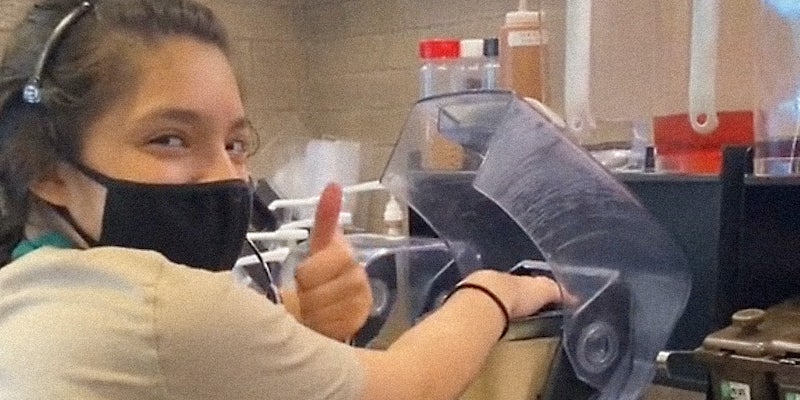 The clip shows how one worker copes 'when the high school kids order six tall Frappuccinos all at once.'

Starbucks workers are accustomed to high-volume order filling, but maybe not quite like it’s done in a recent TikTok. That video hilariously shows how one worker tries to cope, when, as the creator put it, “the high school kids order six tall Frappuccinos all at once during peak.”

The clip comes courtesy of TikToker @kbkingsize, who has drawn nearly 418,000 views in three days from people who just can’t get enough coffee content in their lives.

As the creator assessed of the video, “This was just dumb and funny to us.”

The video’s only 13 seconds but gets right to it, showing a barista struggling with a blender with the caption, “Oh, God, I hope we didn’t fill it too much.” She does, at the very end, react like she has indeed filled it too much and has to clean up some of the spillage before getting to the task of filling six cups.

The content was certainly relatable to one Starbucks worker, who chimed in, “Thinking about when I had to make 11 venti mocha cookie crumbles for one order during peak at Disney, and couldn’t batch … I wanted to cry.”

That led the creator to respond, “Would have clocked out and Mickey Mouse laughed my tail out the door.”

Another observed, “My old manager would sit over our shoulders and make sure we made each one individual for “quality control.”

“Nah, miss me with that one, lol,” the TikToker said in response.

Another added, “I fit four ventis into one blender. Anything is possible.”

A fellow member of the four ventis/one blender club advised, “I just put a dome lid on top of the blender and close it so it’s not loud.”

Another had a perhaps more conventional approach: “Just gotta do the heads-down both hands on the blender pose and pray.”

“And always a tall,” the TikToker pointed out, adding, “Like it’s 50 cents more for a grande.”