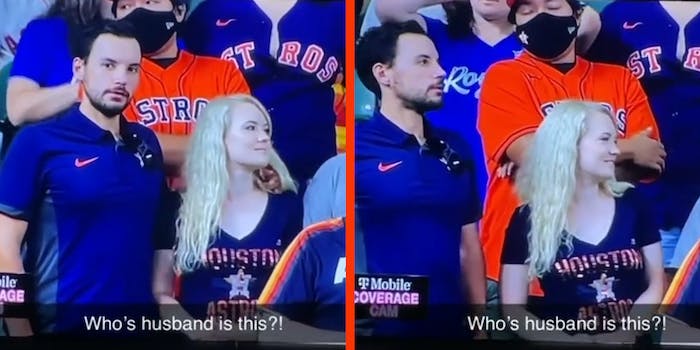 'Whose husband is this?'

A viral TikTok has people convinced a Houston Astros fan was cheating on his significant other after he was spotted pulling away from a woman on the stadium Jumbotron.

However, upon further investigation, it appears to be a well-played ruse.

TikToker @salflo91 posted a recording of moment, in which a branded “coverage cam” went around looking for fans doing silly things. When the camera showed one “couple,” the dark-haired man looked directly into the camera as he pulled away from a blonde woman in an Astros team shirt. The caption reads: “BUSTED.”

Also making the Jumbotron video suspicious is the man in gray next to the left woman nudged her as if to let her know she was on camera.

“He looks guilty,” one viewer noted in the comments section of the clip.

The video even made the local Houston news. However, the video appears to have been extremely quick and clever thinking by everyone involved. One commenter alleged, “Another poster found them. They are married and he’s clowning the cameraman. And us.”

With the help of some TikTok commenters, a little internet sleuthing does, in fact, lead to a photo of the couple together at a dinner on a business Instagram page. It’s unclear if the couple is married, but they don’t appear to be trying to hide their relationship. As one commenter noted: “The FBI works hard, but TikTok works harder.”

The Daily Dot has reached out to the TikToker and unnamed woman in the video for additional information.