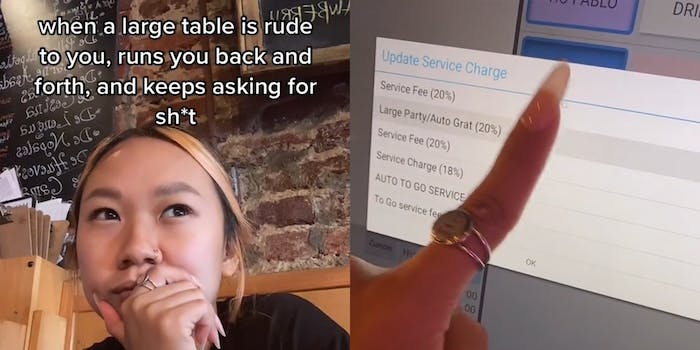 Server reveals what she does to large tables that are ‘rude’ and ‘keep asking for sh*t’ in viral TikTok, sparking debate

A TikToker shared a video of herself adding the 20% automatic gratuity that restaurants use for large parties, to make a point about rude customers, going viral and setting off a debate about tipping in the process.

The video comes from the @kaybaltazar account, and it’s gained 1.1 million views in its first day on the platform. It’s a simple, eight-second video with two parts.

In the first part, the TikToker is looking thoughtful in a restaurant setting, with the caption, “When a large table is rude to you, runs you back and forth, and keeps asking for sh*t.” It’s soundtracked by the “Baby, I’m a gangster, too” line in Lana del Rey’s “Jealous Girl.”

The scene then cuts to a restaurant point of sale register screen, where she’s adding the “large party/auto gratuity” 20% option.

The video is accompanied by a caption that elaborates further on her feelings: “I’m usually really nice and never add it but ppl are so mean, lol. I’m just tryna do my shift and go man.”

The creator also pinned some comments that provided an indication of how the dialogue went in her comments section. One read, “Our systems automatically adds it tho lmfao fyi.”

She added, “ALSO if you’re offended by a joke you should probs check yourself! We’re servers not servants!”

That prompted one respondent to chime in with, “I’m sure it’s a joke” and an eyeroll emoji.

The video aligned people (or at least revealed people to be part of) two camps: One supportive of the server for wanting a decent tip for having to endure the behavior she describes, and others finding her to be overstepping—even though an automatic tip for a large party is the norm in restaurants.

“Good on you!” one commenter exclaimed. “In my three years as a server, I found that nobody who complains about autograt would have tipped more. They say that but they lie.”

However, another commenter chimed in right below that, “So you’re upset about doing your job?”

Another said, “I refuse to pay anything but food and drinks. If you want a decent tip, do your job.”

“People who don’t agree with tipping should not go to places where tipping is necessary,” a commenter countered. “Tipping is how servers pay their bills. Lowlifes don’t tip.”

One even accused the TikToker of “embezzlement” for “adding” the standard 20% surcharge, though as someone pointed out, “How is it embezzlment to add a required gratuity that’s clearly listed on the website and menu.”

That led them to an exchange in which they sarcastically called each other “honey,” debating whether or not that auto gratuity really was “required.”