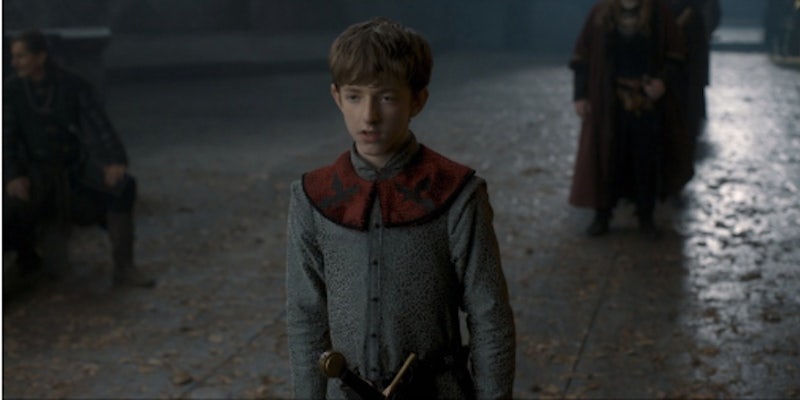 House of the Dragon/HBO Max

A fight in the new 'House of the Dragon' between two suitors introduces viewers to a new favorite.

Warning: This article contains spoilers for House of the Dragon episode 4, “King of the Narrow Sea.”

For all of the politics and drama that the main players of House of the Dragon (and Game of Thrones before it) bring to the series, some of its more memorable characters are the scene stealers who might only ever be background or minor characters. (Hello, Ser Pounce.) In the latest episode, an early contender for the season’s most obscure, scene-stealing MVP has emerged, and so have the memes celebrating him.

Early in “King of the Narrow Sea,” Rhaenyra (Milly Alcock) is situated at Storm’s End—the seat of House Baratheon—to listen to the various lords of Westeros give their pitch on why they would be the best person for her to marry. We’re introduced to two of those suitors, which illustrate the ends of the spectrum of men vying for her hand: Lord Dondarrion, a man older than her father who once met her great-grandmother Alysanne; and Willem Blackwood (Alfie Todd), a boy that Rhaenyra calls “a child.”

Willem Blackwood’s nerves are visible as he stutters through what House Blackwood, an ancient house whose history goes all the way back to the Age of Heroes, could offer her. But as he does so, an older suitor (though still on the younger side) named Jerrel Bracken (Gabriel Scott) keeps taunting Blackwood like he’s a heckler at Blackwood’s comedy show.

“‘Protection’?” Bracken jeers. “The Princess has a dragon, you dumb cunt.”

Rhaenyra is mildly amused by the entire thing but calls for the next suitor to step forward. But those plans go awry until Bracken calls Blackwood “craven,” leading Blackwood to take out a sword and fight Bracken. Moments later, the fight ends not with Blackwood’s death—which, given Blackwood’s stature, seems like the more likely outcome—but with Bracken’s instead; Rhaenyra glimpses Blackwood pulling the sword out of Bracken’s gut before he struggles not to vomit from the sight of the murder he just committed.

Rhaenyra might not have been impressed at Blackwood’s moves (and ultimately her tour of paraded suitors comes to nothing), but viewers certainly were entertained.

And people also love a good set of subverted expectations.

Jerrel Bracken and Willem Blackwood don’t exist in Fire & Blood as characters, but they do have book counterparts. Amos Bracken and Samwell Blackwood similarly dueled to win Rhaenyra’s favor, but that matchup had a very different outcome: Amos Bracken won, and nobody died. (Their fates, like so many other characters in Fire & Blood and HOTD, will be tied up in the Dance of the Dragons.)

But it’s also something of an Easter egg for book fans, who may be aware of the longstanding feud between House Blackwood and House Bracken, whose ancestors were both once kings in the Riverlands; each house argues the other was only petty lords. It’s the kind of rivalry that, with thousands of years to fester and grow, would easily turn into violent outbursts between two young lords.

We might not see young Willem Blackwood again, but whether he’s a stand-in for Samwell (whose name they could’ve changed after a bard had the same name in episode 3) or a new character entirely, it’s not the last time House Blackwood will come up: Samwell’s son and sister, who may well show up in future episodes or seasons of HOTD, both have a role to play.