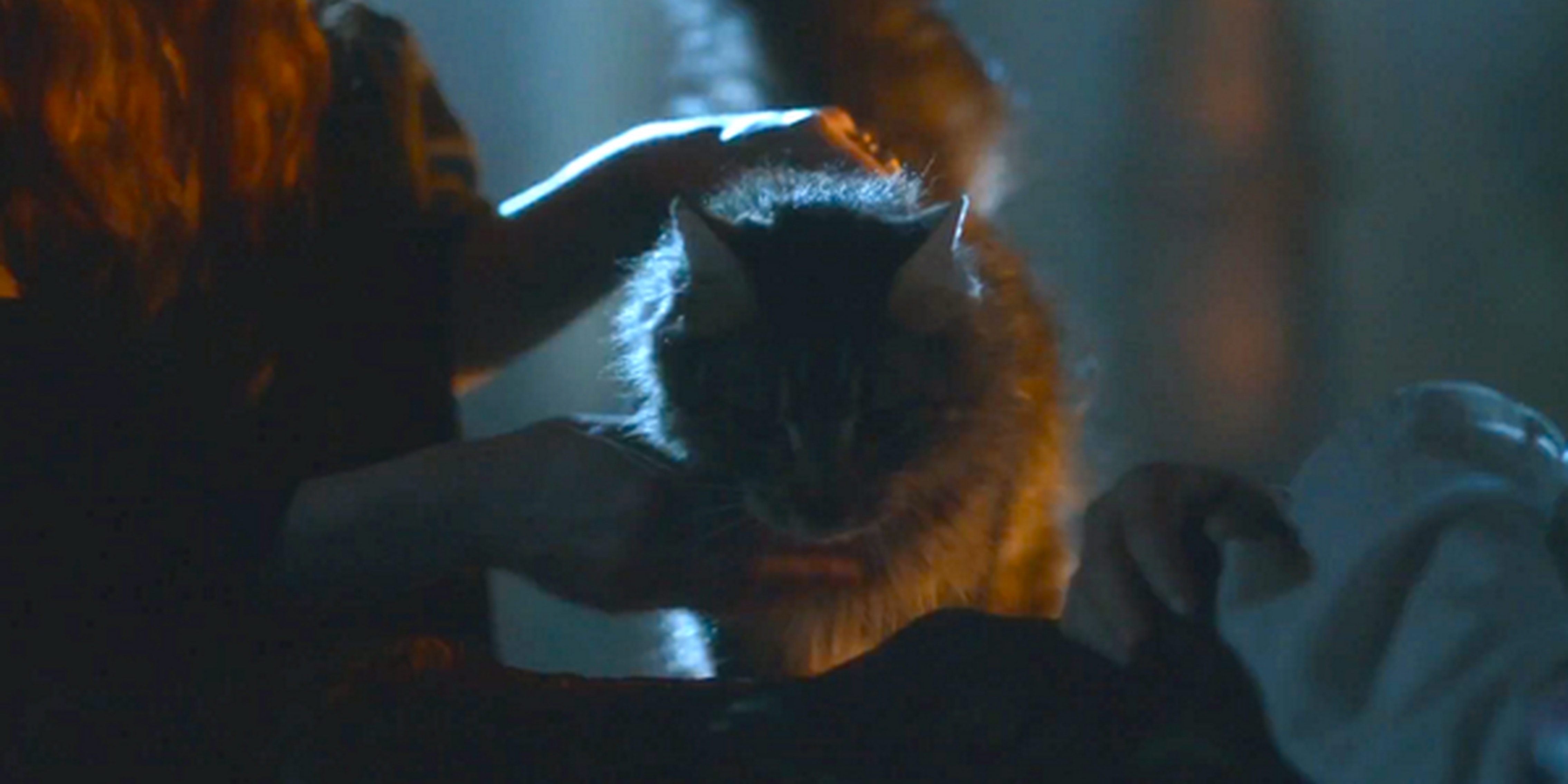 A guide to Ser Pounce, the ‘Game of Thrones’ cat clawing at our hearts

Wait, theories? About a cat who’s only in the show for a few minutes? Oh, you have no idea.

Warning: Minor spoilers for Game of Thrones and A Song of Ice and Fire.

Forget the potentially giant spoiler HBO dropped on Sunday night. Game of Thrones fans are rejoicing at the introduction of A Song of Ice and Fire’s most adorable minor character, Ser Pounce.

“Adorable” isn’t really a word that gets thrown around a lot in Westeros, even given the inclusion of Daenerys Targaryen’s three growing dragons or the Stark children’s direwolves. But in the case of Ser Pounce, Tommen Baratheon’s pet cat, it’s well-deserved.

The long-talked-about feline made his first appearance in episode 4, “Oathkeeper,” as a tool to break the tension between Tommen and Margaery Tyrell during a secret bedside visit. And, well, it worked. The seduction talk went from marriage and secrets to a cat, and it captured the Internet’s heart.

A few days after the episode aired, GOT fandom was crushed when Vulture broke the story that Ser Pounce’s first appearance on Game of Thrones would also be his last. Bryan Cogman, who penned “Oathkeeper,” noted in an interview that we probably won’t see Ser Pounce again.

Thx for the kind words, everyone. Obviously can’t comment on certain scenes. I will say that cat was a nightmare to work with. #Oathkeeper

We’ll certainly miss the little king’s cat and all his potential shenanigans. (Hey, maybe he’ll be recast!) And we’re not alone.

If you’re wondering what’s all the rage about Ser Pounce, we’ll break down all of the facts, hopes, and theories surrounding “the Pounce That Was Promised.”

But wait, theories? About a cat who’s only in the show for a few minutes? Oh, you have no idea.

Just who is Ser Pounce anyway?

We already saw Ser Pounce as he is in the show, but when it comes to the books, the beloved kitten’s origin play out a little differently.

Tommen, who is approximately 9 in the books, receives him and two other black kittens, aptly named Boots and Lady Whiskers, as a gift from Margaery in A Feast for Crows. As it turned out, Tommen wasn’t the only character aged up in the show.

Pounce and the other kittens loved to chase around a mouse made of fur scraps attached to a fishing pole, but was eventually taught a lesson by Cersei Lannister after one of the other cats stole the mouse he caught.

“Ser Pounce must learn to defend his right,” she said. “In this world the weak are always the victims of the strong.”

What’s the Internet’s obsession with him?

Part of it is that Ser Pounce is a cat, and well, we love our cats. He hasn’t killed anyone we love, so that’s a point in his court. And look no further than the Tumblr tag for the cat’s appreciation.

“We got Ser Pounce,” WyMANderly wrote on Reddit. “Ser Pounce is in the show. This is officially the greatest episode of Game of Thrones to date.”

Yeah, seriously—and it’s a hoot. The account has been posting consistently since May 2011, and he’s got over 13,000 followers. Once Ser Pounce made his first—and probably only—appearance on Game of Thrones, people rediscovered the account and started tweeting at him. He may only have the one episode, but now that he lives on in the Twitterverse, there’s no telling what he could do.

People shouldnt worry because I’m not in the rest of season 4. Obviously I’ll be back, who else would kill the dragons?

But what about those theories you mentioned?

In a way, Ser Pounce has turned into a meme online, a placeholder for just about every theory you’ve ever heard from ASOIAF.

Realistically, he probably won’t have a big part to play in future books. But that won’t stop people from coming up with tinfoil theories that he’ll one day sit on the Iron Throne, that he’s actually Benjen Stark in disguise (but then again, who isn’t Benjen?), or that one of the Stark children may warg into the cat to kill Tommen.

OK, but are there any actual theories about Ser Pounce?

Yes! There is one that leans on the side of tinfoil, but first you’re going to need a Westerosi history lesson.

Known as the Kitten Theory online, it starts all the way back in A Game of Thrones (book one) with a detailed description of the cat Balerion, who belonged to Rhaenys Targaryen—the daughter of Rhaegar Targaryen and Elia Martell. She was murdered by the Mountain during Robert’s Rebellion before the books started, but nobody ever heard about the cat again. Some fans believe that Rhaenys or Bloodraven warged into Balerion.

However, because of the amount of time George R.R. Martin spent describing Balerion, people believe that the cat with the torn ear Arya Stark spent some of her time chasing in King’s Landing is in fact the same cat, based on the description and based on testimony that the wild cat hates the Lannisters. It’s a coincidence, at the very least, that fans spotted as early as 1999.

“That’s the real king of the castle right there,” one of the Gold Cloaks told Arya in AGOT. “Older than sin and twice as mean.”

The theory goes on to suggest that Ser Pounce, Boots, and Lady Whiskers are descendants of Balerion and have been protecting him from their ancestor for some time; Tommen mentioned that Ser Pounce hissed at the mean cat during A Dance With Dragons.

Yep! Now here’s a cute video to distract you from the loss of Ser Pounce on Game of Thrones. He would’ve been an admirable adversary to Cersei.