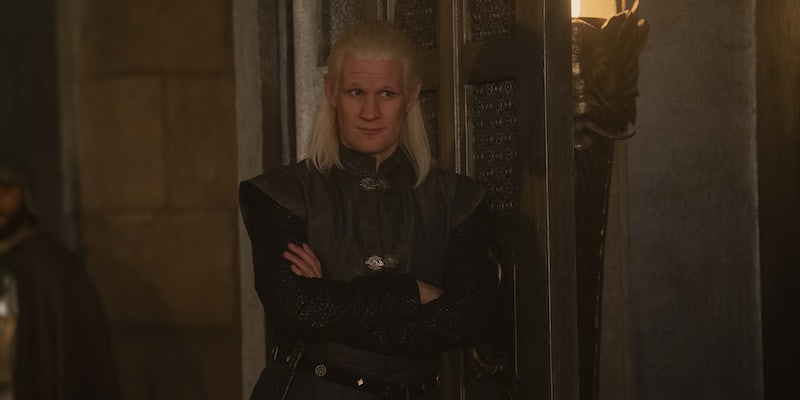 The rare book change that gives a character a better fate.

Warning: This article contains spoilers for House of the Dragon episode 7.

As fans are well aware by now, House of the Dragon’s primary resource—George R.R. Martin’s Fire & Blood—is full of contradictions about how certain events play out. But in the latest episode, sometimes even the ironclad events aren’t as set in stone as we thought they were.

“Driftmark” reunited Rhaenyra (Emma D’Arcy) with her uncle Daemon (Matt Smith), and with it came one of the first questionable moves for the blacks, which is the name for people who supported Rhaenyra’s claim to the Iron Throne; the greens supported Alicent Hightower (Olivia Cooke). She wants to marry the newly widowed Daemon, but he points out the elephant in the room. Although Daemon wasn’t one to have an issue with polygamy, having suggested it previously for himself, the rest of Westeros wouldn’t for it and Rhaenyra’s husband Laenor (John Macmillan) is still very much alive.

Rhaenyra is, rightfully so, fearful about what rumors her enemies might suggest if Laenor is killed so close to her; she believes they’ll think that she had something to do with it. She doesn’t want to be a tyrant.

“A tyrant rules only through terror,” Daemon tells her. “If the King isn’t feared, he is powerless. If you are to be a strong queen, you must cultivate love and respect, yes, but your subjects must fear you.”

Daemon finds Qarl Correy (Arty Froushan), Laenor’s paramour, and gives him an offer he can’t refuse: Give Laenor a quick death (but one with witnesses), take the gold, and you can reinvent yourself in Essos, where you only need money. And it seems like Qarl did just that as we see the two fighting in the Hall of Nine before a body is removed from the fireplace, the face disfigured beyond recognition; Corlys (Steve Toussaint) and Rhaenys (Eve Best) are distraught at losing another child. Sometime later, Daemon and Rhaenyra have a Valyrian wedding as their children, not exactly thrilled about it, watch on.

It’s not until the final scene that we see a cloaked man running to a boat on the shores of Driftmark while another is in the boat. The first man removes his hood, revealing that Laenor, no longer with his silver dreadlocks, was waiting for him. The duo, having faked Laenor’s death, prepare to row far from Westeros, supposedly never to return.

The rare character who gets a ‘happy’ ending

Laenor’s fate in HOTD vastly differs from Fire & Blood, and for once it’s a welcome one: In the book, Laenor dies, something that is never brought into question. We learn that he’s killed by his paramour Qarl Correy (Arty Froushan) in a swordfight after they got into an argument in Spicetown, a town located on Driftmark. Qarl then escapes the island and disappears, never spotted by anyone again.

It’s at Laenor’s funeral (and not Laena’s, as depicted in the show) where a young Aemond Targaryen (Leo Ashton) claims Laena’s dragon Vhagar for his own, fights with Jacaerys (Leo Hart) and Lucerys Velaryon (Harvey Sadler), and loses one of his eyes at Lucerys’ hand after Aemond calls the boys “Strongs.” The show also brings Laena’s daughters Baela (Shani Smethurst) and Rhaena (Eva Ossei-Gerning) into the fight, making Aemond’s theft even more personal for Rhaena, who had planned to claim Vhagar for herself.

While Laenor’s death is never questioned in the histories, the motive behind it was. One in-universe source, Grand Maester Mellos, merely mentioned the argument that led to Laenor’s death. Septon Eustace named Qarl as the culprit and posited that Laenor was attempting to move on with a young squire. The court foot Mushroom suggested that Daemon paid Qarl to kill Laenor, leaving him free to marry his niece Rhaenyra, and killed Qarl so the knight could never reveal Daemon’s role in the scheme. Corlys also put a bounty on Qarl’s head, but he was never seen again. Minus the fake-out, Mushroom’s account seems to get closest to the truth.

Earlier this season, HOTD came under fire for playing into the “bury your gays” trope with the death of Ser Joffrey Lonmouth (Solly McLeod), a character who was introduced and killed off in a single episode. There’s an argument to be made that while Westeros is brutal for its queer characters (as Game of Thrones also demonstrated with Loras Tyrell), it’s brutal for just about anyone who tries to play the game; in the grand scheme, Joffrey’s death is among the first in the leadup to the vast bloodshed that will come for many of its major players.

Had Laenor gotten his book death, the criticisms about HOTD killing off its queer characters so quickly, likely would be even louder: His death opens the pathway for Daemon and Rhaenyra to marry. And before Qarl came at him with a sword, Laenor apologized for being a terrible husband and father and pledged to recommit himself to Rhaenyra’s cause.

“We made an arrangement, all those years ago, to do our duty and yet explore happiness,” Laenor told her. “But there are times, I think when these things cannot mutually exist. Ser Qarl will return soon to the fighting in the Stepstones, but I recommit myself to you and to strengthening our house as we prepare you for your ascension. I will raise our sons to be princes of the realm.”

Did Daemon play a role in faking Laenor’s death?

When Daemon presented Qarl with the proposal to kill his lover, he seemed set on death and suggested a way for Qarl to still live out his life after killing the prince consort.

“Do you know, there are places across the Narrow Sea where it doesn’t matter what a man’s name is, only how much gold he possesses?” Demon asked.

Although we see Daemon and Rhaenyra appear to plot Laenor’s death and speak of how it’d gut Corlys and Rhaenys, he probably did play a role. You can read their kindness of setting him free to mean something other than death. Daemon’s chat with Qarl could be about how the latter needed to make the fight look convincing enough, at least until every Velaryon guard left the room to get help and Qarl could explain.

Daemon is on location at the castle Driftmark when Qarl makes his move and kills an unsuspecting guard, whose face was probably placed in the fire to make it look like Laenor died. That gave Laenor the chance to run away from his parents, his wife, and his children (in name if not blood).

Will we ever see Laenor and Qarl again?

We know that, as of right now, Laenor doesn’t have a role to play in the Dance of the Dragons because, in Fire & Blood, he died nearly a decade before the war begins. Any potential role he could play would be speculative.

Laenor showing up to Westeros in the future, whether it’s to answer for the potential death of a loved one or to fight for Rhaenyra’s cause, would have deadly results. Any reveal that he’s alive to the people of Westeros is a threat to Daemon and Rhaenyra’s marriage and whatever children they might have. It’s also fodder for the greens, who can use Laenor to paint Rhaenyra as a sacrilegious polygamist (technically true) and a harlot who has no respect for any kind of sensible rules of law in Westeros. Politically speaking, what choice would the two have but make sure Laenor is dead for real this time?

As for whether we might glimpse Laenor and Qarl living freely in Essos? There could be a chance, far later in the story, when they could potentially pop up, whether it be in a different Targaryen’s story or as other, as of yet uncast, characters in disguise. But right now, it’s unlikely given the scope of the story HOTD is trying to tell.

What the hell will happen with Seasmoke?!

Honestly? We’re not sure. Fire & Blood features several types of bonds between dragonriders and their dragons. We hear about bonds formed with an egg in the cradle. Bonds occur when Targaryens are young and older. As Aemond demonstrated in episode 7, a rider can also force a bond onto a dragon possibly still not quite over the last bond. But so far, we’ve only seen the bond break in two ways: The death of the dragon (Viserys and Balerion), and the death of the dragonrider (Laena Velaryon). The fact that a dragonrider fakes his own death and chooses to leave his dragon behind puts us in uncharted territory.

Criston Cole’s ill-formed plan to run away to Essos with Rhaenyra in episode 5 brought up dragon abandonment in theory, although Rhaenyra quickly shot him down; on top of not abandoning the throne, it’s hard to imagine Rhaenyra ever abandoning Syrax. But with Laenor, it’s now a reality.

It leaves us with lots of questions, some of which we may never get the answer to. Is Seasmoke aware that Laenor is still alive? Do dragons have some kind of sixth sense about the humans who bond with them, or would it be more akin to the kind of depression that sets in for a cat or dog whose owner recently passed away? If the bond will fade, can someone else eventually claim Seasmoke as their own? Whenever someone does, in fact, claim Seasmoke, what would happen if Laenor suddenly showed up in Westeros again?

Then again, if the near-all-out-brawl between Alicent and Rhaenyra over the fight their respective children got into is any indication, Laenor might be better off staying on the other side of the Narrow Sea, even if it means leaving behind not just his family but his dragon.