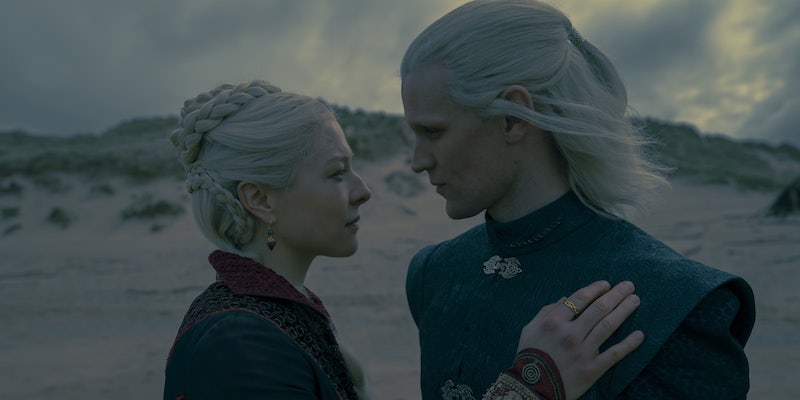 Warning: This article contains spoilers for House of the Dragon episode 7, “Driftmark.”

It only took seven episodes of House of the Dragon for a complaint that plagued Game of Thrones’ final season to rear its head online again.

Between Laenor Velaryon’s fake-out death, young Aemond Targaryen losing one of his eyes at the hand of his nephew Lucerys after claiming Vhagar for his own, and Alicent attacking her stepdaughter with a Valyrian steel dagger, “Driftmark” proved to be a particularly eventful episode. But a good part of the episode—Aegon passed outside drunk, Aemond with Vhagar, and Daemon and Rhaenyra on the beach—took place outside at night.

And for many of the people tuning in, they no almost no idea what was happening. And that’s if they could see anything at all. Some of the chatter began even before the episode aired.

This also led to at least a joke or two about how HOTD basically just showed a big black screen during the new episode.

For what it’s worth, my first time watching “Driftmark” (via a screener that played on my TV) occurred a few days ago on a very sunny day. I turned off the lights, shut the blinds, and made everything as dark as I could; my TV, which I bought in 2015 (but I believe is an older model), was calibrated the best I could. I still struggled to see what was happening.

Even a day after the episode aired, it was still difficult to see the scene at hand while grabbing these screenshots on my laptop.

When people complained about the lighting to HBO Max’s support Twitter account, it appeared to have anticipated this complaint because it had a boilerplate response ready to go.

“We appreciate you reaching out about a night scene in House of the Dragon: Episode 7 appearing dark on your screen,” @HBOMaxHelp tweeted nearly a dozen times as of press time. “The dimmed lighting of this scene was an intentional creative decision. Thanks!”

The lighting choice in “Driftmark” is reminiscent of “The Long Night,” the Game of Thrones season 8 battle episode at Winterfell that’s entirely set at night; both episodes were directed by Miguel Sapochnik and shot by cinematographer Fabian Wagner. “The Long Night” received similar complaints of being so dark that nobody could tell what was happening in the final clash between humanity and the Night King’s army of the dead. At the time, Wagner blamed fans for not properly tuning their televisions to show nighttime scenes and watching the show on smaller screens like iPads.

“Game of Thrones is a cinematic show and therefore you have to watch it like you’re at a cinema: in a darkened room,” he told Wired in 2019. “If you watch a night scene in a brightly-lit room then that won’t help you see the image properly.”

The backlash to that sentiment, which has returned with the nighttime scenes in “Driftmark,” points out the flaws in Wagner’s logic. It’s not just a matter of calibrating your screen properly—some who said they took such measures still couldn’t see it—but ignoring the reality of how their audiences are actually watching TV these days: Sure, the creative team behind HOTD might not want people to watch their show on a laptop, tablet, or smartphone, but they are, and the cinematic quality of the show isn’t showing up on those lower-quality screens. Or while their TVs might not show all of HOTD‘s scenes, it’s hardly enough to buy a new TV because of it.

Game of Thrones and House of the Dragon are fans of using natural lighting when shooting—e.g. a fireplace or torches for indoor scenes—compared to the much brighter (but perhaps less natural) lighting of The Rings of Power or The Two Towers’ Battle of Helm’s Deep, the latter being a brightly lit nighttime battle sequence. However, that doesn’t appear to be what happened with House of the Dragon: Instead, it appears that the show tried to turn footage shot during the day into a nighttime scene, and for many viewers, the choice didn’t translate to a scene they could see.

How do we know? Because we’ve seen photos of some of the first shots of HOTD being filmed. In late April and early May 2021, set photos and video of Matt Smith and Emma D’Arcy filming scenes from the show leaked online; a few days later, HBO Max shared several first-look photos. In both the leaked images and the official photo, Smith and D’Arcy are wearing the same costumes that their characters wear for much of “Driftmark.” And it was bright enough.