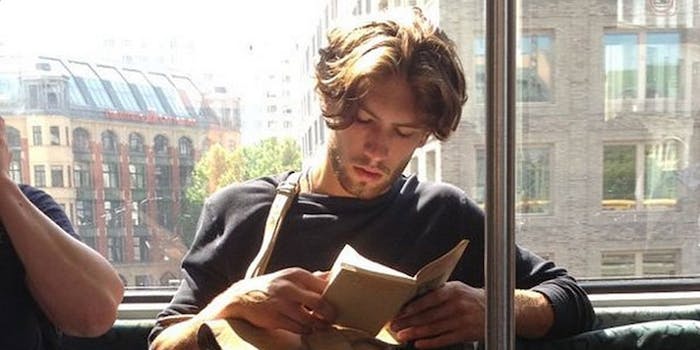 The newest Instagram rage of the moment is Hot Dudes Reading, which has amassed 285,000 followers in a little over two weeks. In case you’re not already one of them, the account features surreptitiously taken snapshots (20 so far) of handsome male specimens deeply engrossed in their reading material while riding the subway in New York—and it is a delight.

In a relatively short time, Hot Dudes Reading has quickly made the Internet rounds. The Huffington Post interviewed its creators, “a group of 20 and 30-something male and female New Yorkers” who wish to remain anonymous, while the New York Post has already tracked down one of the Hot Dudes for comment.

Given its immediate popularity, the account appears to have tapped into a collective desire for gents who know their way around the sections of the Sunday New York Times, but are we all really so thirsty for men of good reading? Or are we just here for the jokes? Maybe both? Here are five reasons Hot Dudes Reading is irresistibly brilliant and wildly popular.

Even as smartphones and social media apps have made posting scenes from public spaces commonplace, covertly taking someone’s picture on the subway is still a transgressive act. For those of us who have done it before—yours truly, guilty as charged—we revel in the thrill of the taboo, knowing that at any second we could get caught by the temporary object of our obsession. Thus, in viewing a stream of such photos, we share in the familiar, naughty pleasures of the undercover photographer.

There’s also a directly participatory element, as anyone can post a photo of a hottie and his book and tag @hotdudesreading or email the creators with Instagram-worthy shots in hopes they they’ll be selected. In this regard, Hot Dudes Reading owes much to Tube Crush, a long-running archive dedicated to the blokes of the London Underground.

For those who adhere to a higher level of social decorum, however, Hot Dudes Reading and other accounts like it offer the voyeuristic gratification of experiencing this forbidden act, one that they themselves would never commit. Of course, to those people I say: Drop the pretense, get out your phone, and start snapping. If you come across such beauty in the wild, it should not go undocumented.

2) It shows that smart is sexy

Make no mistake: These men are being objectified. But considering that Twitter had a lust-fueled meltdown over the flesh on display in the latest Magic Mike teaser, it’s refreshing that these guys are being ogled for their books as much as their looks. Speaking from experience, you’re much more likely to see a dude on the subway playing with his iPhone than paging through a book, which is why these men stand out. And they’re not just reading; they are exhibiting might-miss-their-stop levels of concentration, which is just so hot. It’s like you can see them taking mental notes for what they’re going to write about in their Goodreads review.

It’s also worth nothing that these dudes are reading actual books. In fact, you won’t see a single Kindle featured on Hot Dudes Reading, because its owners are after a different kind of reader altogether, one who appreciates the heft of a printed volume, the satisfaction of finishing a chapter, the joy of placing a bookmark. The men of Hot Dudes Reading represent an increasingly rare beau ideal for our digital age: They’re attractive, cultured, and appreciative of analog media. How could we not fawn over them? John Waters once wisely said, “If you go home with somebody and they don’t have books, don’t fuck them.” Hot Dudes Reading takes that sentiment and runs with it, turning our attention to the man who has a book in hand and, appropriately, conferring special status upon him.

Instagram’s primary purpose is share photos, but this is one case where the captions are just as important as the images, if not more so. Of course, it helps that an account dedicated to good-looking bookworms is maintained by people who show some skill with the written word, not to mention a sense of humor.

Check out this Brooklyn-bound boss' material. Maybe he's an aspiring actor/writer/producer/director/nudist looking for tips. Doesn't matter, I love a man getting in touch with his feminine side. When will he get in touch with mine? Just kidding. #notthatkindofgirl #hotdudesreading

These are, in my opinion, the more successful type of posts since they better display the writer’s wit, though all the captions display the workings of a hilariously overactive brain, one that’s seen 50 too many romantic comedies.

4) It captures our collective tendency to fantasize

It’s human nature to see a stranger and fill in the blanks of their lives, creating a fictional backstory for them based on the limited visual cues at hand. The briefcase means he’s a lawyer, her stilettos indicate a job in fashion, that dolphin tattoo reflects his questionable judgment, and so on. When we see someone attractive, we wonder if they’d be a good kisser, what kind of boyfriend they’d make, and what shows they’re currently watching on Netflix, projecting onto them all of our desires. Hot Dudes Reading both embraces that instinct and sends it up, taking the impulse to very funny extremes that are still rooted in behavioral truths.

In this regard, Hot Dudes Reading reminds me a lot of She Has Had It!, a popular Instagram account that specializes in crafting elaborate, fictional narratives for a bizarre and deliciously déclassé cast of characters—many of them riding the subway, in fact. Though these two accounts couldn’t be more different in tone and subject matter, both display a brilliant aptitude for storytelling and imagination, which factor into our daily lives, in which we inhabit public spaces filled with anonymous faces.

Listen, I get that Hot Dudes Reading is a pet project between friends who want to make people laugh. That is its primary purpose, and it does that very well. But it’s also undeniable that part of its widespread appeal is related to the way it riffs on romantic notions about how we meet people and form relationships. We still want to believe in the power of the meet-cute and common interests, that she could be your next girlfriend because she, too, went to the Godard retrospective alone, that he could be your next husband because you reached for the same box of frozen chicken nuggets at Trader Joe’s.

Books hold a special power, both in how we present ourselves to the world and how we interpret others. I’m reminded of one of my favorite New Yorker covers, a subway scene in which a man and woman, passing each other on trains going in opposite directions, lock eyes after realizing they’re reading the same book. It’s an emotionally loaded situation for the subjects and the viewer; their mutual attraction is instantaneous thanks to their shared reading material, but the moment is fleeting, and there will be no meet-cute today.

Inadvertently or not, Hot Dudes Reading traffics in the same sort of wishful thinking that a book cover could lead to love, albeit in a very tongue-in-cheek way. But just because it’s funny doesn’t mean there aren’t some real feelings there.