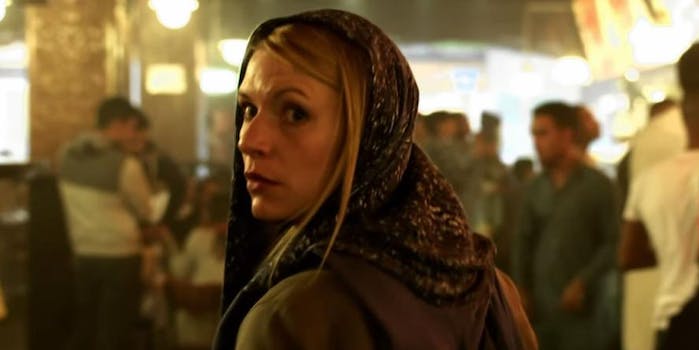 The Internet called out Homeland's racism problem, but the real race issue is much bigger than one show.

This was always going to be rocky year for Showtime‘s Homeland. Four seasons in, the show is no spring chicken, and with the polarizing finale that capped off its last season, stakes were going to be high no matter what this time around.

But on Thursday, Homeland was struck another blow, when the Washington Post’s Laura Durkay alleged it holds the title of the “most bigoted show on television.” In a critique that goes beyond scathing, Durkay writes:

It’s easy to argue that Homeland is just a TV show, a thriller that naturally demands diabolical villains and high stakes. But these same stereotypes about Arabs and Muslims are used politically to justify actions in the real world—U.S. wars, covert operations and drone strikes; CIA detention and torture; racist policing, domestic surveillance and militarized borders. In this context, Homeland is not just mindless entertainment, but a device that perpetuates racist ideas that have real consequences for ordinary people’s lives.

Homeland isn’t the only show that’s fallen under the lens of bigotry and racism this week. After some careful labeling on the part of Amazon, we were once again reminded how problematic the classic cartoon Tom and Jerry is. Meanwhile, despite good reviews, some have questioned the racial implications of ABC’s Black-ish, and for some weird reason, Donald Trump was among this group, tweeting: “How is ABC Television allowed to have a show entitled “Blackish”? Can you imagine the furor of a show, “Whiteish”! Racism at highest level?” And finally, let’s not forget that “angry black woman” business from the other week.

Homeland can definitely be a problematic show, something Twitter and Tumblr users have been pointing out for years. If you were to turn the sound off, and show it to aliens, on the basest level it would probably look like white people versus brown people. And Durkay isn’t wrong in asserting that the show too often treats all those brown people the same, forgetting that the word “Muslim” applies to a broad range of individuals. But although Homeland shouldn’t be let off the hook, it’s important to remember that television’s problem with racism and bigotry is a lot bigger than one show.

#Homeland seems to find new lows in #racist #sexist #orientalist imagery each year. So sick of those ads on subway.

Is everything about HOMELAND as amazingly racist as it appears?

I don’t watch Homeland, NCSI or any of these other /counter terrorism themed shows. #Because it is simply racist propaganda.

Rolling Stone once referred to Homeland as “the left’s favorite right-wing propaganda,” which is a simplistic, yet surprisingly accurate analysis. Though the show does its best to humanize most of its characters, in its worst moments, it feels like a rallying cry against terrorism. Which, of course, no one is arguing with, in the most one-dimensional sense. The problem is that at times, it also feels like Homeland has lost sight of what it means to fight terrorism. Early on in the show’s run, they had a better grasp on how problematic the notion that the U.S. has to police the world is. But as the show has gone in different directions, they’ve occasionally forgotten that.

It hasn’t been all bad though. Last season, Homeland added the Iranian-British actress Nazanin Boniadi to the cast as an analyst who comes to work for the CIA after a devastating terrorist attack and must wrestle with the way her co-workers look at her based on their ideas of cultural heritage. It was an essential role for the show to add (look, not all brown people are terrorists, some of them actually help us catch terrorists!), and Boniadi was great in it.

It’s unfortunate that Boniadi is probably known best for apparently being auditioned by the church of Scientology to date Tom Cruise, because as big TV fans know, she’s quietly been killing it the past few years, also making appearances on shows like Scandal and How I Met Your Mother. Her presence on Homeland, wherein she played a completely different character than the ones she played on the shows mentioned above, demonstrates how essential it is create an array of characters from all walks of life when you’re dealing with sensitive material. Or when you’re simply trying to write a good show.

Sadly, Homeland’s problems in this area are hardly unique. In fact, they can be seen all across contemporary television. In 2012, Victoria McNally at Flavorwire wrote a piece on “The Most Racially Stereotyped Characters on TV Right Now,” and two years later, not a lot has changed. Talking about The Big Bang Theory, she said, “Kunal Nayyar is stuck playing the awkward, nerdy Raj, who’s so socially dysfunctional that he can’t even speak in the presence of women.”

On Once Upon A Time, McNally noted, “There is literally one actor of color (Giancarlo Esposito) in a sea of pretty white women and European men, and who does he play? The Magic Mirror, a genie who fell in love with the queen and became a mirror just so he could be near her.” And of the awards darling Modern Family, she declared, “We love Gloria. Really, we do. Sofia Vergara is a comedic powerhouse. But does every episode have to include some mention of her ethnicity or her stereotypical ‘Colombian’ behavior?”

Cracked ran a similar piece the same year, called “The 5 Most Bafflingly Racist Shows on TV Right Now.” Among the shows writer Ian Fortey tackled was Glee, FOX’s purportedly liberal bastion of song and dance from powerhouse producer Ryan Murphy. The funny thing here is that although Murphy’s shows are often praised for creating diverse casts, especially where women are concerned, his work has also been attacked numerous times for the offensive and stereotypical content that runs through it. And Fortey isn’t even the first one to single out Glee in this regard.

Fortey singles out a particularly egregious episode. “’Asian F’ is about one of the Asian characters getting an A-, which is so terrible that his father demands daily drug testing for him,” writes Fortey. “And that’s such a great example of why Glee continues to skirt under the radar, because they made that ridiculous stereotype the focus of an entire episode like that somehow ameliorated the stupidity of it existing.” He continues, “Glee‘s producers think that by shoving their parade of characters and their intense stereotypes in your face, rather than having them be subtle, it’s cool, because they’re acknowledged.”

The other show that’s been a staple in pop culture over the last few years that Fortey really tears into is, unsurprisingly, is CBS’ 2 Broke Girls, a series which has built up such a distasteful reputation overtime that you can hardly say its name without someone shouting, “Offensive!”

As Fortey observes, “The blatant racism in the show wasn’t lost on pretty much anyone on Earth who’s actually seen it, and you can read articles about it in the New Yorker, on Jezebel and in this particularly enlightening summary of a press junket for the show in which the creator insists it’s all OK because everyone gets made fun of and he himself is gay, so how could what he does be offensive? How could a gay man be racist? Go on, get your abacus, try to explain it. You can’t.”

Here’s the really depressing part: even shows that are regarded as classics aren’t exempt from horribly prejudicial attitudes. And this isn’t in reference to shows like with intentionally racist characters, like All in the Family, either. We’re talking about shows that are almost universally beloved, and thought to be forward thinking, even daring.

Last year, Complex’s list of “The 50 Most Racist Shows of All Time” ran amok on a litany of television programs, at least a few of which the average TV fan has to have cherished in their time. Sure, the list was partly comedic (Fox News was ranked number one), but it also made some alarmingly good points.

Besides singling out already mentioned culprits like Tom and Jerry, Glee, and 2 Broke Girls, the list also goes after the whiteness of Friends, Sex and the City, and Happy Days. Complex also points out the obvious racism of animated shows like Family Guy, and the satirical but still potentially problematic racism of animated shows like The Simpsons and South Park. They also single out Looney Tunes and 24 for the same reasons people have gone after Tom and Jerry and Homeland (which makes sense, given that Homeland was actually created by 24 scribes Howard Gordon and Alex Gansa.)

Oh, no, wait-there were Puerto Ricans. On that one episode…that got protested…and was yanked from syndication…because it was so offensive. So hey, at least there’s that.

So what’s the takeaway here? Racism exists on television, as it exists everywhere in life. But while everyone knows that a show like Cops is inherently racist, it’s less apparent that something seemingly innocuous (like That ’70s Show or American Idol) could be pretty routinely racist too. Homeland is not the main culprit here, they are a byproduct, of a culture that continues to sweep bigotry under the rug. The good news is that representation on TV is getting a lot better. But for shows like Homeland, there’s still a long way to go.