Almost 15 years ago, ‘Black People Love Us’ taught the internet how to troll

One of the web's earliest satirical sites still packs a punch.

Long before Chelsea Peretti had her own Netflix special and a starring role on Brooklyn Nine-Nine, and before her brother Jonah Peretti founded a couple websites called BuzzFeed and the Huffington Post, they were a pair of relatively unknown comedians looking for outlets.

They found one in 2002, when together they created a website called Black People Love Us. 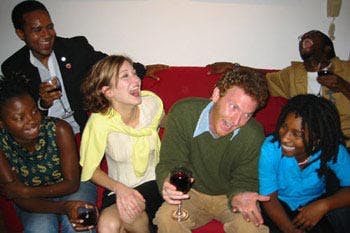 Photo via Black People Love Us

The site features a fictional white couple, Johnny and Sally, who claim to be loved and embraced by the black community, a fact that befuddles their other white friends.

Jonah had already had his first taste of fame in 2001 when an email exchange he had with Nike went viral. At the time, Nike was running a promotion where they would personalize a pair of shoes for you by putting the words of your choice on the side. Jonah decided to take them up on the offer and requested a pair with the word “Sweatshop.” Nike was not amused and refused to fill the order. Jonah forwarded the resulting email exchange to a group of friends, who forwarded it to their friends, and so on. Amazingly, a few months later, he found himself on the Today Show debating a Nike executive 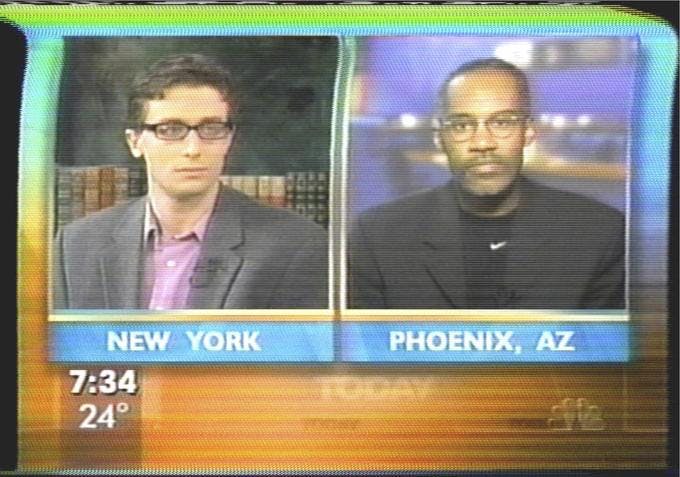 The experience got Peretti thinking about the nature of viral content, the use of satire, and, although it wasn’t a well-known term at the time, the beauty of trolling. That’s when he enlisted his sister Chelsea to help create what would become one of earliest, and most influential, pieces of satire on the internet.

Black People Love Us was full of testimonials from black people extolling Sally and Johnny’s virtues.

When it first launched, the site was met with a mixture of amusement and anger. This was the early 2000s, before it was assumed everyone on the internet was being sarcastic, and a lot of people didn’t know what exactly the creators were trying to say. Skimming through the site’s letters page, it’s clear that people were confused about what was going on.

That websites a joke right? If not I have to say I’m sort of appalled and EMBARRASSED by what I’m reading here. You make a WEBSITE dedicated to the fact that you happen to have black friends? Let me ask you this, if you think that having black friends is novelty enough that you’d make a corny poorly designed website dedicated to it…. you’re singling out black people as somehow being different enough that it’s strange for whites to befriend them. That as far as I’m concerned is a form of racism. By the way, the pictures that you’ve plastered all over your site are ridiculous. Unless this is in fact a joke site, I feel that you’ve basically eliminated all your credibility.
–Arkera

After looking at your website, I at first was appalled by the outlandish rhetoric that was used throughout it. However, the more I looked at the site the more I was conflicted in my views. At first glance this seems like a mockery of the black culture and made by ignorant people, however, it also seems like a mockery of white culture and its ignorance and constant quest to be “hip”. So as of now, I am leaning towards the satire aspect of this website and the ignorance that it is exploiting. I commend the creator for making this site, however it would have been nice to know who actually are the creators, because i dont believe it is just sally and johnny, rather a collaboration of them and soem black people. If this was indeed made by these 2 then I really do not know what to think, angry laughter is all i can see then.
Keith RC II
A black student at University of Virgina.

I don’t get it. You guys can’t be white, can you? I don’t know if this is some racist shit or what. It’d kinda funny but from who’s perspective. I’m not bigging up any racist shit so fuck you guys if your racist, and keep up the good work if your black (it’s still confusing).

Even people who did understand the point the Peretti siblings were trying to make didn’t always approve of their methods.

As this example shows, anyone who pokes fun at a social ill without examining the consequences of that ill is not an author of satire but of a clever form of imitation at best. Unfortunately, as imitation is “the sincerest form of flattery”, these would-be satirists perpetuate the very problem they were attempting to criticize; they invite those who are secretly attracted to the social ill in question to get in on the fun and write off those offended by such a counterproductive pastime as “not getting the joke”.

Jonah claimed the two were “…trying to create a site that satirizes subtle forces of racism.”

“I think when you’re using humor, it’s not something that everyone will think is funny,” Chelsea said on Good Morning America. “I don’t think humor is always a universal thing. If everyone thought it was funny, I would be surprised,”

Oddly enough, the site might be more relevant now than it was 15 years ago. Back then, no one would have predicted that in 2016 we would simultaneously have a sitting black president and a GOP nominee who’s all but openly racist.

And, of course, let’s not forget a Democratic nominee who goes on a black radio show and makes sure to let the host know she carries hot sauce in her purse. Sally and Johnny would be proud.

Photo via The Breakfast Club