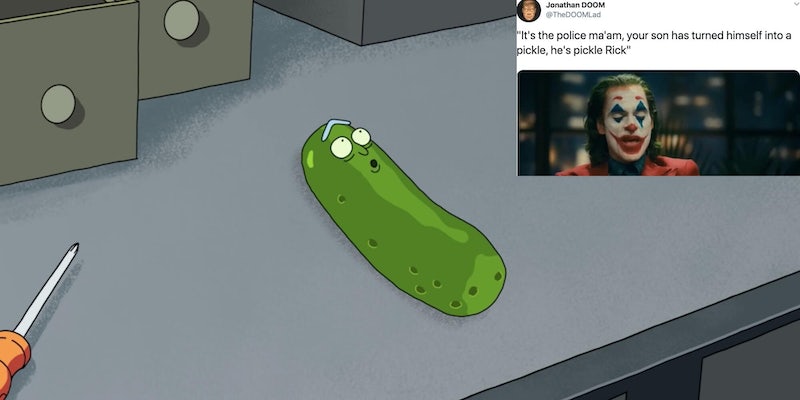 Pickle Rick is back.

It’s been a while since a Rick and Morty meme took over the internet. The mega-popular show was in its peak from 2016-2018, before its notoriously toxic fandom crossed the line with a series of Szechuan sauce-related riots. Since then, we’ve all been able to enjoy a brief reprieve from viral content about Adult Swim’s spiky-haired scientist.

Now, Pickle Rick—a Rick and Morty staple—is back and making the rounds on social media. This time, though, the memes are more ironic and aren’t only being generated by diehard fans of the show.

It all started when redditors began bringing back Pickle Rick in late 2019. Various versions of “I kid you not, he turns himself into a pickle” began cropping up on Reddit.

In January and February of 2020, more and more Reddit users began joining in on the trend, using the vintage meme format of top and bottom text.

By early March, the “he turns himself into a pickle” meme had found its way to Twitter, where it started to go viral in earnest. People started pairing the text meme with screenshots from video games and movies.

Before long, the meme took a political turn. George Bush, Bernie Sanders, Elizabeth Warren, and more were not immune to the inexorable spread of “he turned himself into a pickle.”

Truly, this meme format is so simple and versatile, even infants can use it.