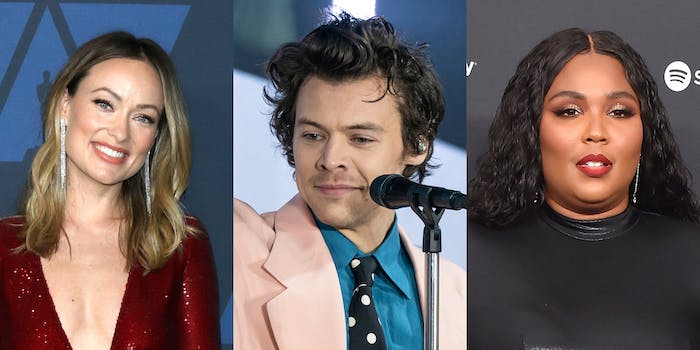 Harry Styles and Olivia Wilde nearly broke the internet yesterday when photos of the two celebrities holding hands at a wedding made the rounds on social media.

TMZ reported that Styles attended a wedding in California for his manager, Jeffrey Azoff, over the weekend and brought Wilde as his plus-one. A source told People magazine the two stars “were affectionate around their friends, held hands and looked very happy,” and “have dated for a few weeks.”

Fan reaction was predictably split on social media. Some people were delighted to learn of the potential new coupling, while others mourned the shrinking of the celebrity singles pool. As Chris Black, head of creative agency Done to Death Projects, tweeted, “Zoe Kravitz and Channing Tatum, Harry Styles and Olivia Wilde. Tough day for us all.”

Another vocal subset of Twitter users wondered why people didn’t draw the same dating conclusions about Styles and Lizzo when the two pop stars were seen holding hands at the Brit Awards last February.

Styles and Lizzo made headlines for their flirty behavior at the awards show. When host Jack Whitehall jokingly questioned Lizzo about her relationship with Styles, who was sitting one table over, Lizzo grabbed Styles’ hand and put her arm around him. During an interview backstage, Lizzo said she and Styles were “like an old married couple.”

Many Twitter users found it curious that Styles and Lizzo didn’t ignite the dating rumor mill like he and Wilde did.

A lot of people perceived the discrepancy as a racist or fat-phobic double standard, since Lizzo, a large, Black woman, doesn’t fit the same conventional beauty standards as Wilde, a thin, white woman.

“I love white girls thinking Harry styles wouldn’t date lizzo,” @ugoldenboy tweeted. “So tell me, is it because she’s fat, or because she’s black? There is no right answer. Fuck yall. They’d be a POWER couple.”

Generally speaking, there is credence to this argument, as Hollywood and entertainment media are riddled with such double standards. In this case, however, there’s a big difference between two obviously friendly celebrities hamming it up for the cameras at an awards show and two celebrities attending an intimate wedding together.

Styles and Wilde were also seen arriving at Styles’ Los Angeles home with luggage—a decidedly non-platonic thing for two people to do after attending a wedding together. Plus, they had plenty of time to get close while they worked on Don’t Worry Darling, the upcoming psychological horror film directed by Wilde and starring both her and Styles.

In either case, pour one out for all the hearts that broke over the news of Styles and Wilde’s coupling.