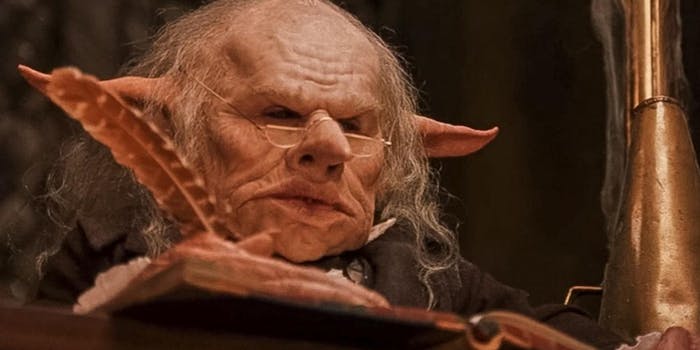 Stewart was shocked that J.K. Rowling would 'just throw Jews in there to run the ****ing underground bank.'

The goblins of Harry Potter have long been criticized as a veiled antisemitic stereotype, an idea that recently attracted more attention thanks to Jon Stewart. Speaking on his podcast, Stewart drew comparisons between the Potter movies’ goblins (a race of secretive, untrustworthy bankers) and classic antisemitic caricatures.

“It was one of those things where I saw it on the screen and I was expecting the crowd to be like, ‘Holy shit, [Rowling] did not, in a wizarding world, just throw Jews in there to run the fucking underground bank,” said Stewart. “And everybody was just like, ‘Wizards.’ It was so weird.”

The movies portray goblins with hooked, oversized noses, bearing a resemblance to Nazi propaganda cartoons. Of course, J.K. Rowling didn’t personally invent this piece of supernatural imagery. Harry Potter‘s worldbuilding draws from centuries of European folklore, not to mention other fantasy novels and movies. But this particular folkloric detail has offensive connotations that continue into the current Fantastic Beasts franchise, seemingly unexamined by Rowling or Warner Bros.

Following Stewart’s comments, the Campaign Against Antisemitism posted a statement describing Harry Potter’s goblins as “the product of centuries of association of Jews with grotesque and malevolent creatures in folklore, as well as money and finance.” At the same time they defended Rowling as a “tireless defender of the Jewish community” in real life, suggesting that Harry Potter‘s antisemitic subtext was accidental.

This commentary on Harry Potter‘s goblins reflects wider concerns about the franchise’s depiction of underrepresented minorities across the board, including a lack of Jewish characters. Many of the books’ nonwhite characters are seen as tokenistic at best, and racist or stereotypical at worst. For instance, Cho Chang’s name, or Nagini’s role in Fantastic Beasts. Meanwhile, Rowling’s international worldbuilding has faced harshed criticism, including pushback against her simplified usage of Native American folklore, and the incoherent politics of magical America.

The Daily Dot has reached out to Warner Bros. for comment on this controversy.

Update Jan. 5, 3:5pm CT: In a video posted to his Twitter account, Stewart clarified his comments. “I do not think J.K. Rowling is antisemitic,” he said. “I did not accuse her of being antisemitic. I do not think that the Harry Potter movies are antisemitic.”