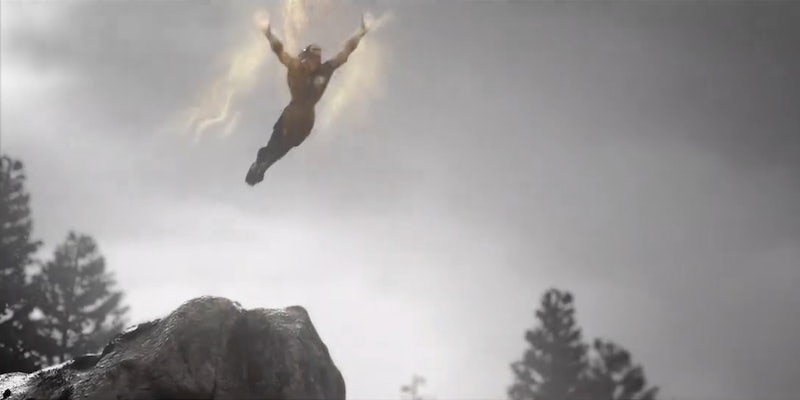 Was the peace between Native Americans and colonial wizards really as simple as JKR makes it seem?

J.K. Rowling is getting hit with a wave of backlash over the first of a four-part history lesson on wizarding in North America she is releasing on Pottermore this week.

Some Harry Potter fans began reacting with anger over several elements of Rowling’s take on Native American folklore. They were particularly upset about what they considered to be her appropriation of Native American skinwalker mythos. According to Rowling’s text:

The legend of the Native American ‘skin walker’ – an evil witch or wizard that can transform into an animal at will – has its basis in fact. A legend grew up around the Native American Animagi, that they had sacrificed close family members to gain their powers of transformation. In fact, the majority of Animagi assumed animal forms to escape persecution or to hunt for the tribe. Such derogatory rumours often originated with No-Maj medicine men, who were sometimes faking magical powers themselves, and fearful of exposure.

In 2010, British writer Loree Westron described the process of appropriating Native American culture as occurring on both a minor and a major scale in media and literature.

Away from their traditional contexts, the original meanings and significance of religious practices, such as the use of sweat lodges in ritual cleansing, can easily be lost, and new meanings attached. Over time, these reinterpretations can mutate into something quite different from the original, and as they become more familiar to the dominant culture, these new interpretations can mistakenly be seen as being ‘authentic’. It is when these new interpretations remain linked to the original culture that real problems arise. Incorrect cultural renderings, I believe, can be highly destructive, undermining – or even replacing – traditional beliefs and practices.

Rowling wrote that the skinwalkers, a myth of the Navajo, were actually magical animagus that jealous non-magical medicine men slandered with derogatory rumors. Native Americans and fans viewed that as undermining and replacing the real myths that the Navajo created independently in their own cultures. They were not happy.

@jk_rowling you are not entitled to our history, culture, stories. They are not yours to re-invent, re-define, re-imagine, or to profit from

When we say that non-native writers, filmmakers, artists are not entitled to our history, identities, culture & imagery we mean just that

We're saying there is a problem with non-natives who take without permission, without understanding and without respect for native people.

Native American scholar Dr. Adrienne Keene wrote responses to the issue on both her blog and Twitter:

You can't just claim and take a living tradition of a marginalized people. That's straight up colonialism/appropriation @jk_rowling.

It's not "your" world. It's our (real) Native world. And skin walker stories have context, roots, and reality. https://t.co/mRZD0M1UCf

“[H]ow much more delightful could Magic in North America have been if she’d put an ancient, still-thriving Macchu Picchu magic school alongside a brash, newer New York school? How much richer could her history have been if she’d mentioned the ruins of a “lost” school at Cahokia, full of dangerous magical artifacts and the signs of mysterious, hasty abandonment? Or a New Orleanian school founded by Marie Laveau, that practiced real vodoun and was open/known to the locals as a temple — and in the old days as a safe place to plan slave rebellions, a la Congo Square? Or what if she’d mentioned that ancient Death Eater-ish wizards deliberately destroyed the magical school of Hawai’i — but native Hawai’ians are rebuilding it now as Liliuokalani Institute, better than before and open to all?”

So far the lessons have been relatively short overviews. It’s not clear if Rowling plans to expand on North American wizarding history in more detail ahead of Fantastic Beasts and Where to Find Them.

The backlash continued after today’s update, in which Rowling explained that native wizards and witches were friendly and welcoming to European magicians who chose to hide among them. She also said that developing conflict between natives and settlers in the colonial years was primarily the fault of non-wizards—No-Majs—and intolerant Puritans.

Plenty of people have rushed to Rowling’s defense.

I don't get what the fuzz is all about. The myth of skinwalkers are in the public domain. And I think J.K…. https://t.co/w7soNv7yP1

Rowling so far has not responded directly to the controversy.