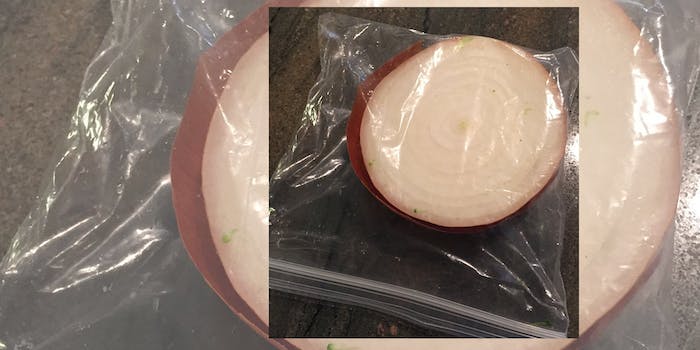 In America, anyone can be anything. Hell, a reality television personality can become president! And a half-onion in a plastic bag can dream of one day having more Twitter followers than the putative leader of the free world.

What if this account that is simply half an onion in a Ziploc bag ended up with more followers than @realDonaldTrump? pic.twitter.com/D28lODPZLO

Someone decided that Trump, whose brand is built on claiming to be the biggest and best of everything, would be very upset at being out-Twittered by a vegetable, so they started this account in a quest to top him. It’s a tall order: Trump has 21.6 million followers, even with a campaign underway to unfollow him. So far, half an onion has an impressive audience of 139,000. That’s still less than 1 percent of Trump’s total.

Half an onion has its strong points, though. For one thing, it’s more charismatic. It’s also part of a hallowed internet tradition of proving something is bad by setting up a vegetable account and trying to get more followers, first seen in 2010 when a pickle got more Facebook likes than the band Nickelback.

The onion will lose, certainly, but the game is rigged. Trump is one of the verified accounts that new Twitter users can choose to follow—they’re required to add at least a handful—and that ensures a steady supply of new eggs will bolster his total. Additionally, he’s the president of the United States.

Even if the onion-half doesn’t achieve its stated goal, it’s currently sharing anti-Trump tweets with a six-digit following. That’s not exactly small potatoes. (It’s a small onion. Half of one.)