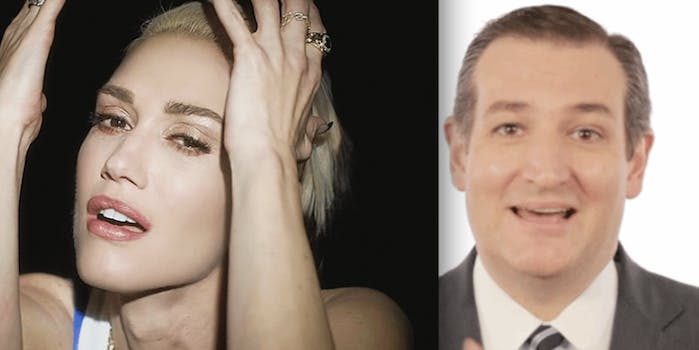 Gwen Stefani, singer/designer/co-founder of No Doubt, was born on October 3, 1969. She is 46 years old but looks way younger.

Exactly. Gwen has kept her youthful exuberance since she first stepped out into the scene with the “Just a Girl” video.

Let’s put Ted Cruz’s facial features aside for the moment, because there’s a bigger fish to fry here: Somehow Gwen Stefani is older than him.

This young lady wants to end her life because of it:

This shocking revelation required all caps:

Here’s a theory that makes far more sense than Gwen Stefani being older than Ted Cruz:

Gwen stefani is older than Ted Cruz. Stress causes aging. The stress of hiding from the world that you're the zodiac killer for example…

This guy is not overreacting at all:

Gwen Stefani is older than Ted Cruz.
I will never trust anything in this world again.

While this woman perfectly summed up the meaning of life:

Cleopatra lived closer to the building of Pizza Hut than of the pyramids. Ted Cruz is younger than Gwen Stefani. Time isn't real & nothing m

This math is off, but it somehow doesn’t matter in the grand scope of things:

So what can we learn from all of this? Absolutely nothing. Life makes zero sense—sorry about that.