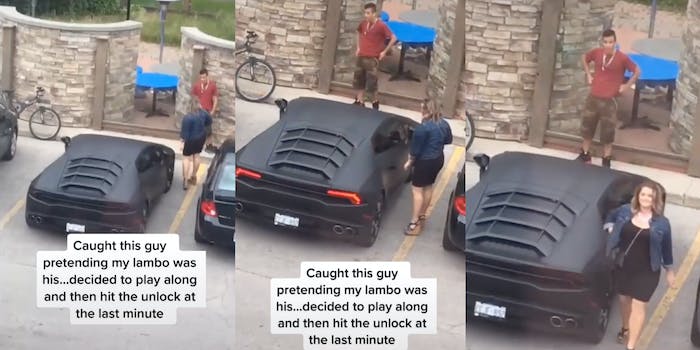 'Caught this guy pretending my lambo was his.'

A man’s failed flex over property that didn’t belong to him ended in humiliation last weekend after a woman caught him on camera pretending that her Lamborghini was his.

A video of the brief encounter was captured by a friend and uploaded to user @babyjayb‘s TikTok account. In the three days since it was posted, the video has become the most popular on her page, with more than 1.5 million views and 161,000 comments.

A text overlay sets the scene, as the short video opens on an apartment parking lot. Nestled in between two very average-looking vehicles, a pristine black matte Lamborghini looks entirely out of place in the admittedly nice, but still commonplace, parking lot.

Standing near the parked Lamborghini, a man in a bright red shirt and camo pants paces back and forth. As explained by @babyjayb—who simply goes by J Beau on her TikTok account—she “caught this guy pretending my lambo was his” and decided to have some fun with him.

So she got herself dolled up and headed down to the parking lot. In the video, J Beau can be seen approaching the man and engaging him in conversation. According to a clarification made via comment, she approached the man and asked if the vehicle was his. When he replied in the affirmative, J Beau attempted to catch the man in his lie. She said she asked him the year of the car, which he simply claimed was “this year.”

Realizing that her moment had come, J Beau responded to this boast in flawless fashion: She unlocked the Lamborghini. The video is filmed from far away but still manages to capture the dumbfounded look on the man’s face—along with the self-satisfied smile on J Beau’s—as she struts around the car to enter the driver’s seat. As she slides in, the man’s shocked look transforms into a somewhat embarrassed smile, and the video concludes.

People applauded J Beau’s “boss moment” in the comments, in between shredding the man for his “Joey Tribbiani” inspired cameo.

“He just woke up and chose embarrassment,” one commenter joked.

Other’s predicted that a nearby bicycle was the man’s actual vehicle, in between pleas to learn what J Beau does for a living that allows her to drive such an impressive car. Clarification in the video’s caption clears up that the vehicle is, in fact, her “friend’s lambo” but that doesn’t make the moment any less sweet.

J Beau could not be reached for comment by the Daily Dot.