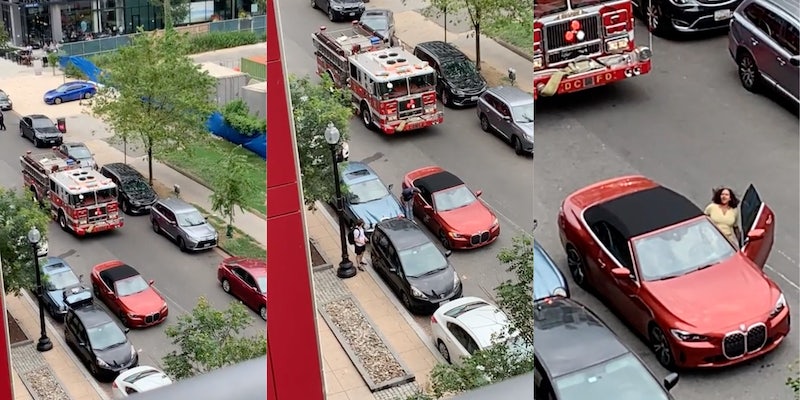 Video: Karen blocks firetruck during apparent emergency so that she can shop

'I really don't think that someone's house or even life should be on the line because somebody wanted to go shopping.'

A viral video on Reddit video shows a woman blocking a firetruck during an apparent emergency while in a shopping center.

Posted to Reddit’s popular r/iamatotalpieceofshit by u/freakynit, the video shows cameraphone footage of a firetruck being blocked by a red droptop late-model BMW.

The firetruck is apparently loud enough to be heard in any first-floor store as it must have been loud enough—and sitting blocked long enough—for someone a few stories up to pull out a phone to film it.

A couple walking by stops to inspect the vehicle; one looks into both sides of the car to see if it’s occupied. The parked BMW has its hazard lights on. As they walk away, a woman comes out with a small bag. Despite the sirens—and the fact and that she’s blocking an emergency from being attended to—the woman seems decidedly unbothered while walking to and getting in her car.

The woman finally gets in and drives away, allowing the firetruck to get through the tight street.

Some commenters, furious at the woman, suggested that the firetruck should have just pushed through without regard for the car. One said: “Should’ve just ran into the car; I really don’t think that someone’s house or even life should be on the line because somebody wanted to go shopping.”

Others remarked on the way “she casually walked back to her car” and had her hazard lights on, with one commenting: “Where did people ever get the idea that hazard lights = park anywhere including middle of the street. I’m infuriated that they held up an emergency vehicle on the way to potentially save someone’s life.”

“She parked with hazards in the middle of the street,” another said. “She felt a sense of entitlement; shame never follows decisions like that.”

And some expressed hope that the woman will face some sort of repercussions for her actions. “Let’s hope the fire truck got her no plate and escalated this to the cops,” another top comment read.

While the video was posted to Reddit on Sunday, it is unclear where or when the incident took place.