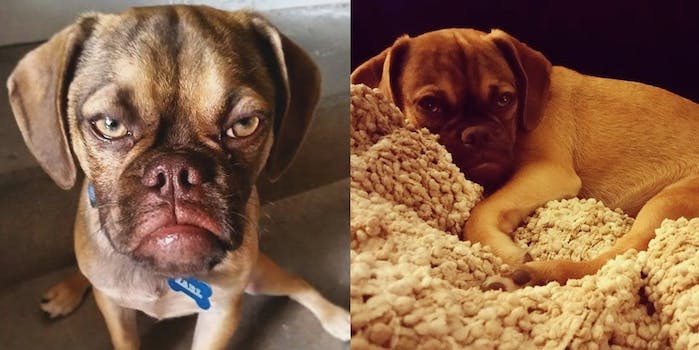 First there was Grumpy Cat. Now there is Grumpy Puppy

Just look at those eyes.

Grumpy Cat is one of the Internet’s biggest celebrities, having made appearances at SXSW and even starring in her own holiday movie. But she better watch out, because there’s a new sourpuss in town and he’s both bark and bite.

Earl first got some love earlier this summer on Reddit, where he was posted to r/aww by his owner Derek Bloomfield. The peeved pooch’s photo got more than 2 million views on Imgur. There’s even a subreddit devoted to the  pug and beagle mix.

Bloomfield told the Mirror, “He is the most relaxed, content puppy either one of us has ever seen. Whenever he wants something he’ll calmly sit down and stare at us until we ask him the right question. Then he wags his tail in approval.”

Earl is even being compared to the likes of Ron Swanson from Parks and Recreation and Samuel L. Jackson in Django Unchained.

It’s unclear if Grumpy Puppy is the Ariana Grande to Grumpy Cat’s Mariah Carey. Grumpy Cat’s managers offered a cold congrats to the pup’s newfound success via email: “Congratulations on your viral success. It’s all downhill from here.”

Editor’s note: This post has been updated for context and clarity.