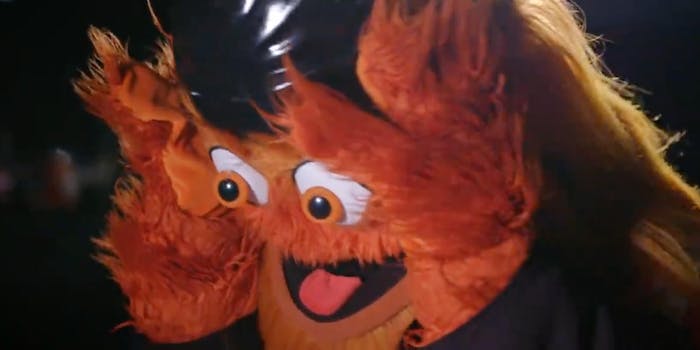 Gritty under police investigation for allegedly punching a teen fan

A Flyers fan is accusing the beloved mascot of punching his son.

A Philadelphia Flyers fan accused Gritty of punching his 13-year-old son in the back during a photo shoot. Now, the beloved mascot is under a police investigation, according to the Philadelphia Inquirer.

Chris Greenwell told the Inquirer that he and his son posed with the mascot for a photo in November. His son, Greenwell said, tapped Gritty on the head. This is where Philadelphia Flyers owner Comcast Spectator and Greenwell disagree on what exactly happened.

Greenwell told the Inquirer that Gritty “took a running start” and punched his son in the back, leaving a bruise. A chiropractor allegedly diagnosed the boy with a “contusion to lower thoracic spine with subluxation.” Comcast Spectator claims that in its own investigation of the events, it could not produce a witness or video of the incident. Comcast Spectator further claims that interviews with Gritty and his handler did not corroborate Greenwell’s account. The name of the man inside the Gritty suit is not public information.

Laurie Kleinman, vice president of risk management at Comcast Spectator, reached out to Greenwell regarding the incident.

“It is unfortunate that you and your son had a bad experience at our Gritty Photo Event,” Kleinman wrote in an email to Greenwell. “Therefore, we are offering an opportunity to discuss a creative way to restore your son’s love of the Philadelphia Flyers.”

Online, the incident and investigation have become the subject of ridicule. Some express concern that this may be a “scam” on Greenwell’s part. Comcast Spectator offered to seat his son on the warmup bench with players before an upcoming game to “restore his love for the team.” The Inquirer reports that Greenwell asked for his son’s face to be shown on the scoreboard and given an opportunity to meet players in the locker room.

no witnesses to what is described as a pretty violent act when you are waiting in line for over an hour and a back and forth negotiation about access to players or getting your kid on the scoreboard….bullshit.

Others are making jokes in poor taste about Gritty assaulting children. One user tweeted a video of Gritty hitting the bottom of a trashcan with the caption, “Gritty beating the shit out of every child he sees.”

Gritty beating the shit out of every child he sees pic.twitter.com/BYAFw3DjZk

I wish Gritty would punch me. I would say thank you, I'll have another

if gritty ever punches me, do NOT prosecute him. he caught ME slipping. that is on ME.

If Gritty punched a kid, the kid deserved it. End of story.

The Inquirer reports that a Philadelphia Police spokesperson said there are no other pending investigations against the mascot.