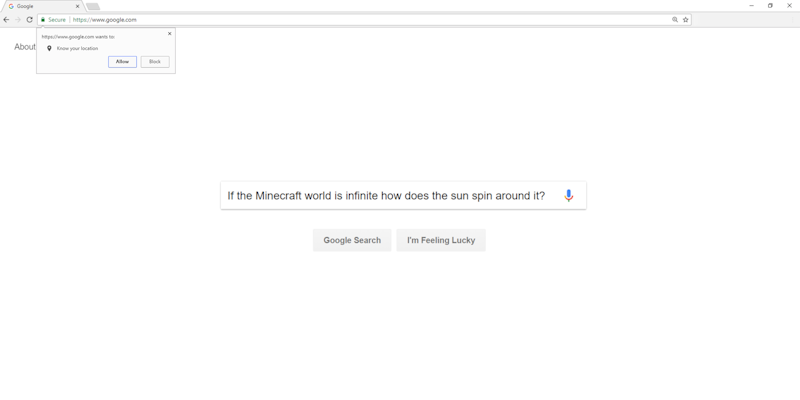 Everyone's spying on you!

The meme landscape in January 2018 was dominated by the “big four”: Logan Paul, Ugandan Knuckles, kids eating Tide Pods, and “Somebody touch-a my spaghet.” But when it came time to vote for “meme of the month,” Reddit’s r/dankmemes forum didn’t choose any of them. Instead, they went with a total underdog: “Google wants to know your location.”

The meme is a twist on those annoying browser popups you get whenever a website wants to access location services, but instead of a faceless, robotic request to change your privacy settings, it assumes there’s actually someone watching you browse.

In the joke that started it all, “Google” is a total horndog, asking for the locations of people who search “is it normal to have a 15-inch penis?”

Soon, people were replacing Google with other characters. If you have a super deep shower thought, Harvard wants to know your location:

If you want to know how to hang yourself, Logan Paul wants to know your location—a grim reference to Paul’s tasteless “suicide forest” video:

If you’re thinking about sayin’ “heck” on a Christian Minecraft server, God wants to know your location:

The variations go on and on. Imagine anyone spying on your internet searches, and you’ve got the formula for this joke.

If this is the first you’re hearing of this meme, you’re not alone. It didn’t get national media coverage like Tide Pods and Logan Paul’s suicide forest escapades, and kids weren’t drawing it on desks and blackboards like Ugandan Knuckles. But that’s part of the point: “Google wants to know your location” wasn’t ruined by overexposure.

In other words, it makes total sense as a sleeper pick for meme of the month.