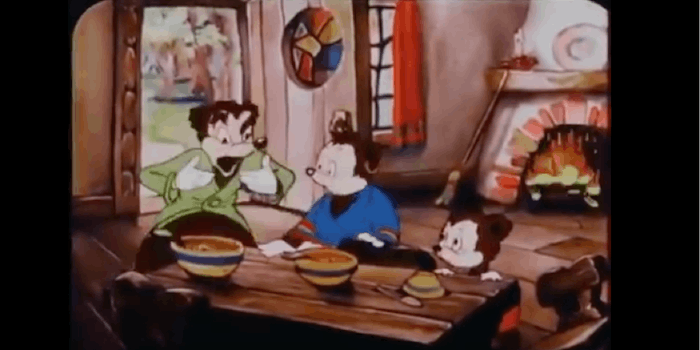 ‘Somebody toucha my spaghet’ is the internet’s best new catchphrase

Papa Bear is freaking out, here!

A 1930s animated version of the classic fable Goldilocks and the Three Bears has become a 2018 meme.

The three bears in the Terrytoons version of Goldilocks are portrayed as over-the-top Italian stereotypes, and the internet is losing its collective mind over Papa Bear’s line, “Somebody touch-a my spaghet!”

The original tweet of the clip came on Jan 2., from an account that’s now locked, but Know Your Meme reports it got more than 3 million views. The YouTube upload above got another 600,000.

PewDiePie, who holds the most popular YouTube channel, called his Jan. 5 video “YOUTUBE TOUCHED MY SPAGHET.” It racked up 6.6 million views, giving the “spaghet” meme a significant boost. PewDiePie used “touching my spaghet” as a euphemism for taking his money. YouTube had recently “demonetized” one of his other videos, meaning it wouldn’t bring him any ad revenue.

Now that it’s popular, the scene from the 1939 Goldilocks cartoon is being used in the same way as contemporary cartoon clips from shows like Spongebob and Jimmy Neutron: as the basis for absurdist YouTube remixes.

This one featuring Smash Mouth’s “All Star” is pretty popular:

As is this remix of The Simpsons scene where Bart builds a stack of megaphones:

Here’s a compilation of a dozen of these memes. Not all of them are watchable. The shaking and distorted sound, standard fare for Weird YouTube, can be a lot to take.

Like the Jimmy Neutron “Sodium Chloride” meme before it, “spaghet” doesn’t have any deep meaning or anything to add to the cultural conversation. It’s just a bizarre clip that YouTubers have seized upon and decided to milk for all it’s worth. The only message in “spaghet” videos is the acknowledgment that you know about spaghet, and that you’re fluent in the YouTube remix vernacular. “I, too, have seen the bear who is upset that his spaghetti meal has been violated!”

Quoting popular one-liners from media has long been part of—or a substitute for—having a sense of humor. Previous generations would recapitulate lines from The Simpsons, South Park, Napoleon Dynamite, and Borat. In 2018, teens quote an FDR-era Goldilocks cartoon, but it’s really the same thing—the sense of participating in a shared popular culture.