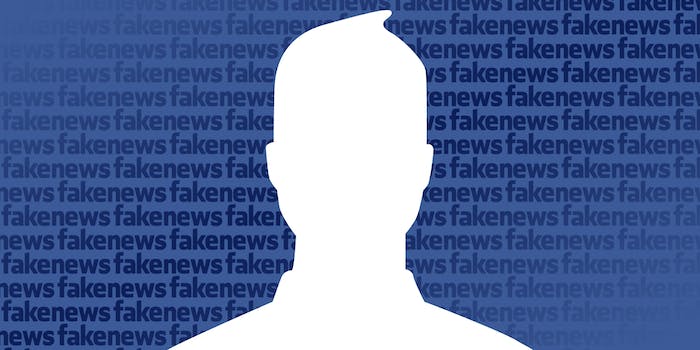 Google and Facebook failed us after the Las Vegas shooting

Social media and search algorithms are losing the battle against fake news.

In the window between a mass shooting and the release of official information, thousands of people will turn to Google and Facebook to find out whatever they can about the event and those responsible for it. And in the wake of Sunday night’s massacre in Las Vegas, which left 59 dead and more 527 injured, those sites failed us once again.

Early Monday morning, rumors misidentifying the culprit started on 4chan, the notorious imageboard responsible for some of the internet’s worst pranks and hoaxes, and were spread by Gateway Pundit, an unreliable right-wing news site. Rather than limiting the damage, Google and Facebook amplified it.

Here are the top Google search results for the hoax victim’s name from early this morning. As you can see, two threads from 4chan’s right-wing, white-supremacist /pol/ message board appeared in “top stories”:

Also, apparently Google is putting 4chan threads in their top story unit now? So, the number one hit for his name is a /pol/ thread. pic.twitter.com/OYwW6pbWvy

/Pol/ isn’t, and has never been, a reliable news source. Anyone can post there anonymously with no vetting, which has always been 4chan’s greatest strength (or weakness, depending on your perspective) as a community, but it should also disqualify the forum as something Google presents as “news.”

But, through some technological oopsie-daisy, there it was this morning.

“Unfortunately, early this morning we were briefly surfacing an inaccurate 4chan website in our Search results for a small number of queries,” a Google spokesperson told the Daily Dot. “Within hours, the 4chan story was algorithmically replaced by relevant results. This should not have appeared for any queries, and we’ll continue to make algorithmic improvements to prevent this from happening in the future.”

Google did not respond to our follow-up question: Do those improvements include making sure 4chan never shows up on Google News again?

This isn’t the first time the anarchic messageboard site has misidentified a killer, and it probably won’t be the last. In some cases, 4chan users have even done it intentionally as a prank. In the case of the Las Vegas killing, it appeared /pol/ wanted to finger a Democrat-voting suspect and imply the attack had left-wing motivations.

But 4channers wouldn’t be nearly as effective without fake news sites to spread their rumors. Gateway Pundit, a fake news site with White House press credentials, wrote up 4chan’s bogus shooting suspect and had to correct its post when law enforcement released the correct name. Gateway Pundit and a site called Liberty News did the exact same thing in 2015, naming a fake 4chan suspect in a shooting at Umpqua Community College.

Shortly after all of this went down, a Gateway Pundit story (fortunately naming the real suspect this time) appeared at the top of a Facebook “Crisis Response” page about the shooting.

Facebook's "Crisis Response" page for #LasVegas leads with a Gateway Pundit post on the murderer–elevating both him and a propaganda mill.

The problem extended to Facebook’s Trending Topics, which highlighted stories from RT, Jihad Watch, and “Trump Landslide 2016” under the “Las Vegas” banner.

The more you dig on Facebook, the worse it gets.

Facebook's safety check news page for Vegas is getting worse each time i refresh. Now it's got a spam link w/ bitcoin wallet pic.twitter.com/BGAYLYtejM

The timing is damning for Facebook. The social network has been under intense scrutiny over its role in the 2016 election, given the proliferation of fake news that dominated the platform and the recent revelation that Facebook sold $100,000 in ads to a Russian company during the 2016 election cycle.

Just last week, Mark Zuckerberg vigorously defended Facebook as a neutral platform. “Trump says Facebook is against him. Liberals say we helped Trump,” Zuckerberg wrote. “Both sides are upset about ideas and content they don’t like. That’s what running a platform for all ideas looks like.”

Perhaps Facebook shouldn’t be a platform for all ideas.

Facebook and Google aren’t just content pipes with no responsibility for the garbage their algorithms surface. As we’ve learned repeatedly over the last year, their actions (or inaction) have the potential to amplify bad actors and even help tilt elections.

That’s acutely felt during immense human tragedies like the Las Vegas massacre. The automated services that are supposed to give us information at times like this aren’t (yet?) capable of handling the task with tact or even basic accuracy. It’s hard enough for a dedicated newsroom.

Facebook has put The Gateway Pundit at the top of its feed today. Google News promoted a 4chan thread. Silicon Valley, we have a problem.

Any attempt to remain politically neutral will backfire horribly on our modern, monolithic information platforms because one side is more aggressive and prolific than the other in spreading fake news. 4chan has always been effective at disseminating hoaxes, creating chaos, and duping the mainstream media. Its increasingly far-right userbase understands how to game social media and search algorithms, and it now has the help of an “alt” media infrastructure that’s sometimes endorsed by the White House itself.

Facebook had Gateway Pundit at the top of the newsfeed today. Is he just not THAT sorry, or did he think no one would notice? https://t.co/bE6XFa8oPD

If they refuse to tip the scales, fearing the appearance of bias, Facebook and Google are basically giving the trolls free rein. This morning, we saw what that looks like.

Correction: Google featured 4chan in the Top Stories section, not in Google News as previously reported, and only for search queries about the misidentified shooter, Geary Danley.