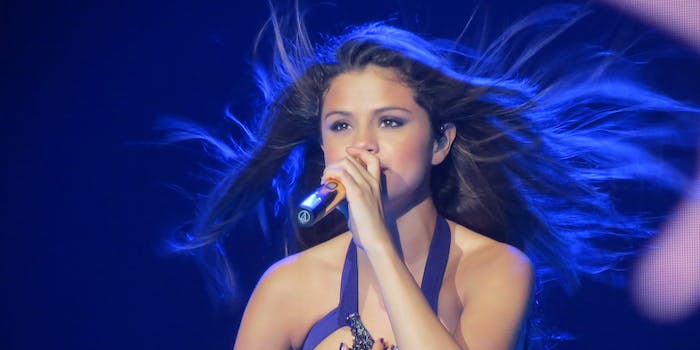 The show mentioned Gomez's kidney surgery in an episode about edgy comedy and cancel culture.

Selena Gomez fans on Twitter have united against an unexpected target: the critically acclaimed Paramount+ legal drama The Good Fight. A recent episode made a brief reference to Gomez’s 2017 kidney transplant, which she received as part of her treatment for lupus. Her fans are now saying The Good Fight made fun of her health issues, leading Gomez herself to speak out.

The #RespectSelenaGomez hashtag was already in action thanks to a similar controversy over a different show. Saved by the Bell came under fire in 2020 for including an argument about the “real” identity of Gomez’s kidney donor, joking that it was secretly Justin Bieber’s mom. The resulting backlash led to a public apology from the show’s creators—and a donation to Gomez’s lupus charity. Selenators are not to be trifled with.

After Gomez’s fanbase drew attention to The Good Fight this week, Gomez criticized the show for making “tasteless jokes,” expressing hope that other TV writers will reconsider any attempts at organ transplant humor. However, there’s a more complicated context behind how this “joke” actually appeared in the show.

Gomez’s kidney transplant is an understandably sensitive topic for the actress and singer. Lupus is a serious illness, and the stress of surgery was compounded by Gomez’s role as a public figure. She kept the surgery secret for several months, saying afterward that the donor (her close friend Francia Raisa) saved her life. But while this Good Fight episode does mention the surgery, it doesn’t necessarily do so in a meanspirited manner. It’s unclear whether Gomez or her fans actually watched the relevant scenes, which provide a more nuanced context.

The Good Fight takes place at a majority-Black law firm, earning critical praise for tackling controversial topics in a bold, insightful manner. July 15’s episode includes a brief reference to Gomez’s kidney transplant, mentioned specifically because it’s a “forbidden” topic. After the law firm is hired to do a sensitivity read on a Netflix-style comedy special, a team of lawyers combs through the comedian’s script for offensive jokes. Their job is to shield the comedian from online backlash. During a conversation about which topics shouldn’t be made into a joke, one character suggests “Selena Gomez’s kidney transplant.” These four words are the only time Gomez is mentioned. It’s part of a wider discussion about people’s differing responses to dark, edgy humor.

It will be interesting to see whether The Good Fight‘s creators make a public apology like Saved by the Bell—a show that skews more toward the demographic of Gomez’s fanbase, and whose joke was more callous toward Gomez’s health issues. The Good Fight routinely covers divisive themes, referencing real people like Harvey Weinstein and Donald Trump. It includes ripped-from-the-headlines storylines about police brutality, sexual assault, and COVID-19. However, it doesn’t have a reputation for punching down or being edgy for the sake of edginess. It’s an adult show that explores real-life issues, focusing particularly on race and gender.

Gomez doesn’t like people making casual references to a difficult, painful time in her life, and (partly thanks to her online fanbase) she has the clout to elicit public apologies. Ironically, this means her response played into the central theme of this Good Fight episode. The show doesn’t want cause harm to someone like Gomez, but it does rely on topical references to discuss sensitive ideas. If you remove those references, the story loses its impact. In this case, the episode ends on an absurd note. While attempting to protect the comedian from online backlash, the legal team changes every potentially offensive joke in her script. The resulting edits are so nonsensical that the comedian bursts out laughing and walks out of the office in disgust. So while some of her humor did cause genuine offense, the final message is that if you second-guess every joke, you ruin the final product.