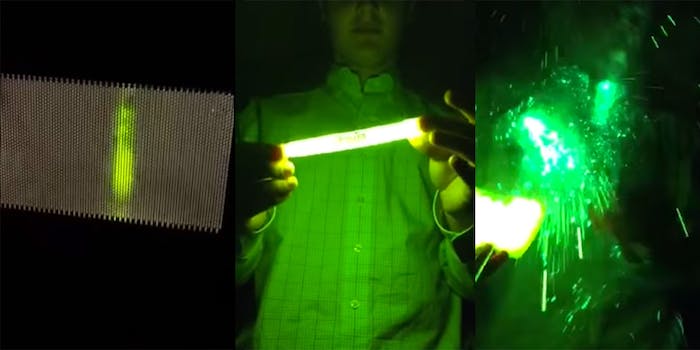 This is why you never microwave a glow stick

Poor Jack. He had a great idea for a YouTube science experiment—heat up a glow stick until it was smoking hot, then bust it open and see what happens. Turns out it gets fluorescent poison crap all over your face, your eyes, and your beautiful shirt.

To add insult to injury, Jack isn’t even the star of his own viral video. It’s his furious dad, who accepts the heroic task of cleaning the glow stuff out of Jack’s eyes, all the while contributing the most quotable dad rant since Gene “You done goofed” Leonhardt.

“Goddammit, Jack. Come here. I have no clue what to do with this.”

“Where’s the stuff on this, Jack?”

“Not to mention, it’s all over your awesome shirt.”

“Yeah, no shit. I said don’t microwave it. Don’t screw around. Which you do with a beautiful shirt on and get it in your eyes.”

“Am I ever right, Jack? Can you ever listen? Get this off.”

“Just sit there and keep flushin’ away with water.”

“You knocked Mom’s spider thing down too. Unbelievable.”

“I’m sure you’re sorry now, Jack. You can always be sorry after.”