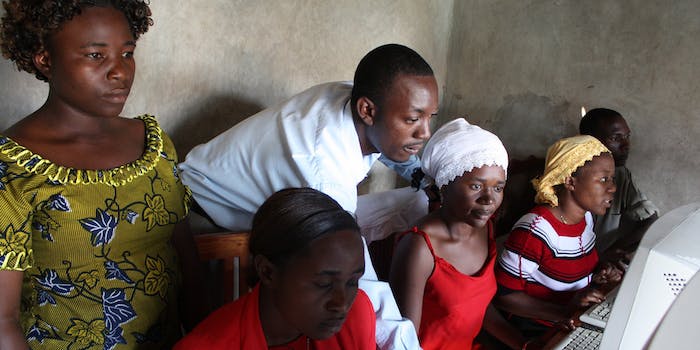 If you are reading this right now, you are privileged.

You are privileged. If you are reading this right now, you are privileged. I am, too. That word carries a heavy negative connotation, but that’s not the meaning I wish to convey. I simply mean to say that we have something most people don’t.

A UN agency reported that in 2013 only 37.9 percent of the world had access to the Internet. I was surprised by the low number. We talk about the web as if it were a global, all-encompassing network of people, but it’s actually a room full of people that the socio-economically disadvantaged can’t enter.

There are bigger problems, of course. 780 million people don’t have clean water, 2.5 billion don’t have adequate sanitation, and more than 1.4 billion people don’t have electricity. However, I think that most of us know, inherently, that we’re fortunate to have those things. On the other hand, we don’t look at an Internet connection the same we look at poverty and we should. Not only does the Internet create a massive number of jobs (to pay for that food), but it’s also a great educational tool (from recipes and how-to’s to technical training and degrees).

The Internet can be a place for distraction, but it can also be a place for real, life-changing learning. People joke about Wikipedia as a source for information, but having the world’s most expansive encyclopedia available for free would have been an absurd idea even fifteen years ago. Hundreds of other sites, like Khan Academy and Coursera, also provide free, in-depth education to people worldwide. Even children want to teach themselves complex subjects when they’re introduced to a Web-connected computer for the first time. That’s only part of the reason some people in the United States want a government-run Internet option that would ensure access for every citizen.

At a UN forum in 2010, Sha Zukang, Under Secretary-General for Economic and Social Affairs, noted, “The Internet can help eradicate poverty, educate people, sustain the environment and create healthier populations.” Sha went on to say that a global Internet push is not an issue we should pursue leisurely because the longer we wait, the longer developed countries build on their connected advantage while developing countries fall further behind.

Some organizations, most notably the Mark Zuckerberg-backed Internet.Org, see how important the Internet is for the growth of developing nations, but the message doesn’t seem to be taking hold domestically. Providing Internet is a sound economic investment that will pay off down the road, but people prefer the idea of donating for someone’s food supply because immediate fulfillment is more powerful than delayed gratification.

Certainly, there are places that are doing just fine without the Internet and would not necessarily be better off with it, but it’s important to see an Internet connection as a tool to fight poverty. We are privileged to have everything the Internet provides—education, commerce, entertainment, community—but we have to be aware that we are lucky to have it. We shouldn’t feel guilty, but we should feel responsible.