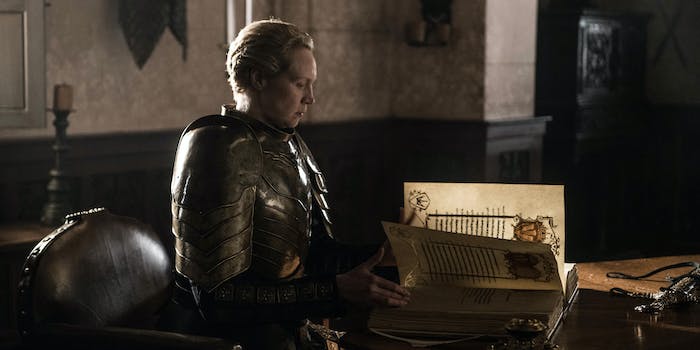 The response was rather unsurprising.

Game of Thrones is in the midst of celebrating its 10th anniversary, which officially arrives on Saturday, with a series of marathons, curated thematic and character-driven playlists, newly available behind-the-scenes footage, and new merchandise. It’s a full affair for HBO, and given that it’s got an anniversary to promote, it’s little surprise that the network is using Game of Thrones’ social media accounts, which still have millions of followers despite the show ending nearly two years ago.

The tweet, which simply said “Winter is coming,” is familiar to Game of Thrones fans. It’s the words of House Stark, a sort of warning about the ultimate threat from Beyond the Wall. It’s the title of the Game of Thrones pilot, which first aired on April 17, 2011. It’s both a meme and real-world political fodder. The @GameOfThrones account tweeted it fairly often, particularly while the show was on the air.

The reaction to the “Winter is coming” tweet was more or less the same as when @GameOfThrones tweeted the exact phrase in November 2019: It reminded people about the end of Game of Thrones, and for those who hated how the show ended, made them mad all over again.

If you can think of a complaint, it’s probably among the thousands of tweets who either replied or made snarky commentary. They didn’t like the writing. Dany’s downfall made no sense. Those final episodes were rushed and often defied logic. King Bran, really?! It killed off any momentum it had. Even when it was so big it wouldn’t please everyone, it really fumbled the landing. And that’s before you get into the nitpicks. For some, Game of Thrones’ accounts emerging to promote an anniversary is like reopening the wound, even if it’s a show they mostly haven’t engaged with since it ended.

Back in 2019, a Change.org petition that called for HBO to remake season 8 went viral. While it was criticized as an example of fan entitlement and something of an insult to the cast and crew, some fans argued that it was a way to voice their frustration with the direction of Game of Thrones’ final season—which was still airing when the petition launched—even if they knew that HBO wouldn’t actually remake it.

Some of that sentiment is still felt by many of the show’s viewers. Hours after the tweet was posted “Season 8” started trending on Twitter.

“Game of Thrones hints that ‘Winter is coming’ again and a lot of fans hope it’s coming to remake the show’s final season, which famously didn’t live up to many viewers’ expectations,” Twitter’s explanation for the trending topic from Wednesday night read.

As was the case in 2019, there’s nothing to suggest that HBO is planning to remake Game of Thrones season 8. However, the potential credence of a season 8 remake doesn’t come from a vague Game of Thrones tweet that’s likely in reference to its own marketing push for the show’s 10th anniversary. Instead, it comes via HBO’s parent company WarnerMedia because it’s already done something similar before: If it can bring fans the Snyder Cut after years of a fervent (and sometimes toxic) fan campaign, it can remake Game of Thrones season 8. It doesn’t matter that WarnerMedia already shut down the idea of releasing new cuts of movies like Suicide Squad, which already had its own push behind it.

Even though we’ve seen at least one instance where a revival aims to correct the sins of an almost universally hated series (hello Dexter), it won’t happen with Game of Thrones. Logistically, it would cost too much, involve too many variables, and for HBO and WarnerMedia, it probably doesn’t make much sense.

For HBO, the future of Game of Thrones isn’t about fixing the Game of Thrones that aired by remaking it. It’s what the rest of Westeros has to offer. House of the Dragon, which is set to be released in 2022, has more dragons than we know what to do with. Dunk & Egg will tap into the buddy-adventure elements that Brienne and Podrick and Arya and the Hound brought. A show about the original Nymeria could lead to some course-correcting on Dorne. Projects about Corlys Velaryon and the King’s Landing section of Flea Bottom could turn the story beyond the petty fights of kings and queens. The prequel play will give us the doomed romance Game of Thrones only hinted at. And an animated series could make possible images that not even an eight-figure budget could depict.

Perhaps it’s not about fixing the past, but using future projects to “fix” Game of Thrones‘ sins in its future projects. Here, we have more dragons and a show all about House Targaryens’ fall from grace. Shows that include the best elements that Game of Thrones had to offer and chances for an even more inclusive cast than House of the Dragon (which is already trying to course-correct on Game of Thrones‘ extremely white cast). There are stories that might offer the potential for happier endings than the bittersweet one Game of Thrones left, or the chance to fully explore a tragic love story instead of depicting one over a single episode with pacing issues.

HBO will have more than plenty on its hands when it’s ready to promote a new show. Sure, people might not always be angry about the ending or we might come to evaluate it in due time. But right now, it’s still fresh enough that no matter which shows eventually make it to our TVs, a reaction of this sort will happen every time Game of Thrones tweets about itself.