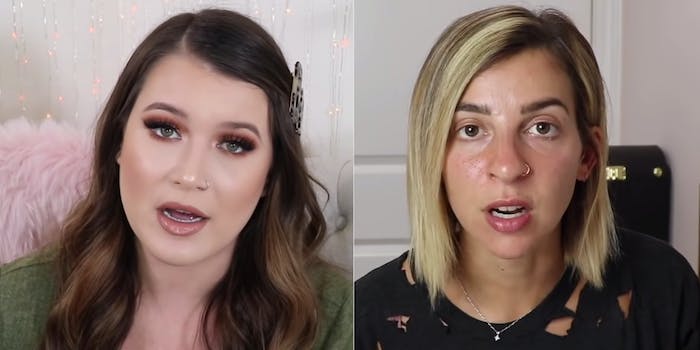 The former friends are again beefing on social media.

Vine is long gone, and a large chunk of the population has never heard of Gabbie Hanna or Jessi Smiles’ viral stardom on the defunct video platform. While they’ve since found lucrative YouTube careers, late Monday they rekindled their Vine beef.

For the uninitiated: Hanna and Smiles had a highly publicized friendship before it all fell apart in the mid-2010s. Their falling-out was prompted, in large part, by contention surrounding the rape Smiles endured in 2013 at the hands of another Vine star, Curtis Lepore. This led to a court case, which saw Lepore plead guilty to felony assault in 2014.

During this tragedy, the relationship between Hanna and Smiles fell apart. Questions about what ended their friendship lingered for years, as rumors about the rape, Hanna’s reaction to it, and her supposed support for Lepore over Smiles, circulated. It became a common perception that Hanna chose Lepore’s side over Smiles. The drama maintained a low simmer among longtime fans of the content creators until a November 2019 video from Smiles brought the story back to the surface.

In the video, “Gabbie Hanna needs to be stopped,” Smiles claimed that Hanna is manipulative and showed her support for social media star Trisha Paytas, who has expressed similar anti-Hanna sentiments on several occasions. She also shared what she said was one of the most hurtful things Hanna said to her: After confronting her former friend about spending time with her rapist and his friends, Smiles claims Hanna told her that “Curtis’ friends didn’t rape you.”

In response to Smiles’ video, Hanna uploaded her own. She fired back at Smiles’ claims that she supported Lepore, claiming she did no such thing. She denied ever collaborating with Lepore. She also claimed that the one time she saw him post-rape, she accidentally took a Snapchat selfie with him, which she then demanded he delete.

This brings us to the most recent drama, shared by Smiles on her Twitter page late Monday. In a series of videos, Smiles shared a phone conversation with Hanna from allegedly summer 2020. She said she shared the videos because Hanna’s “continued lying about my trauma has officially broken me and I don’t know what else to do.” The videos have collected a total of more than 60,000 likes in under 15 hours.

The videos see the two former viners picking through their past arguments, attempting to separate rumor from fact. Hanna admits to speaking, in person, with Lepore at an event. Smiles is clearly upset by this fact and asks why Hanna “would listen to him” at all, given what he has done. Hanna claims she merely wanted to “fight for” Smiles, but ultimately found that Lepore’s version of the rape was nearly identical to Smiles’ version.

Hanna also defended several tweets that she posted amid the Lepore/Smiles news, including one in which she said “girls have cried rape in my neighborhood 1000s of times.” She seemingly admits to initially thinking Smiles was lying about the rape, before ultimately changing her mind. Hanna notes that she doesn’t agree with many of the tweets she posted between 2013 and 2014, but justifies her words by saying that “every single person was saying that you lied.”

Eventually, Hanna demands a “public statement and apology” from Smiles for making her look bad. When she says her lawyers “will not let me drop this without an NDA,” Smiles tells her they should keep the drama offline and invites Hanna to “just sue me.”

Smiles notes that, if they go the court route, they won’t have to drag their followers through yet another dose of drama. Hanna replies that she would prefer to keep her fans involved. She claims that the contention has caused her to become suicidal, but that she won’t let the issue rest until her name is cleared.

The topic of taking things to court seems to stress Hanna out immensely, despite Smiles’ claims that going this route would help to dissipate the online drama. Hanna notes her concerns about the optics of her suing a woman with a child, and says she would prefer to use her platform to clear her name.

The final portion of the phone call sees Hanna again demanding a public apology. When Smiles informs her “That’s not gonna happen,” Hanna tells her that the public back-and-forth will “keep going.” She expresses that she thinks it’s “only fair” that Smiles publicly apologize “considering what I’ve been through.”

In the final tweet, Smiles says she doesn’t “understand how that warrants Gabbie being able to bring up my rape/rapist consistently in order to ‘defend herself’ against things that she…actually did. It’s beyond triggering.”

Viewers were largely behind Smiles and shared their displeasure with Hanna in the comments. Many people noted Hanna’s attempts to play “the victim,” particularly in her last statement about “what I’ve been through” given that it was Smiles who was a rape victim.

A number of commenters found themselves fixated on Hanna’s demands for a public apology.

Just after her viral thread went up, Smiles posted one last tweet before logging off. She admitted to being in “a bad place mentally” and said she “cannot continue this back and forth with Gabbie without sacrificing my sanity.”

Hanna has yet to publicly address the phone call videos.

We reached out to both Hanna and Smiles, and will update this article if they respond.