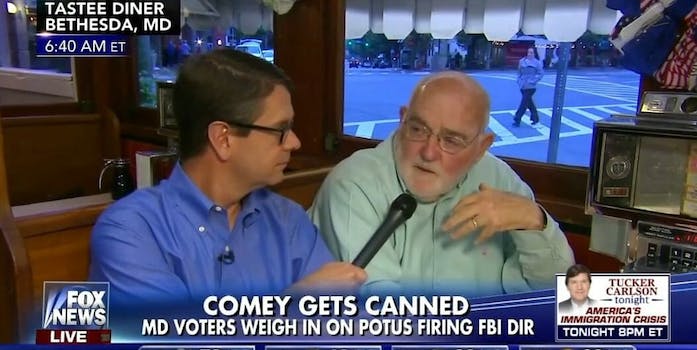 Fox News’s Fox & Friends went out into the streets on Thursday to talk to regular citizens about the firing of former FBI director James Comey and what it might mean for the Donald Trump administration. It might not have gone as expected.

Talking to a man named Pat at the Tastee Diner in Bethesda, Maryland, Fox correspondent Griff Jenkins found what might have looked like the consummate stereotype of a Republican—an older white male who says he doesn’t believe all the news he reads—trying to enjoy his breakfast.

Instead, the man might have taken Fox News by surprise when, after he was asked about Trump’s leadership, the interviewee said Trump had made some “pretty weak promises” and that a man who was used to building buildings and golf courses needs to realize he’s now working for the American people.

For a moment, the interview got back on track when Pat says Comey should have been fired much earlier than he was. But then, Pat starts talking about Putin, and that’s when the interview abruptly ends.

Watch below as Jenkins suddenly feels the need to end the talk when the P-word is broached.

But my favorite part of the entire segment? Here’s the reaction from another diner dude when Jenkins dares lay a friendly hand on his shoulder.

Now, that’s a man who seems ready to say exactly what’s on his mind. As in, “Get your goddamn hand off me.”