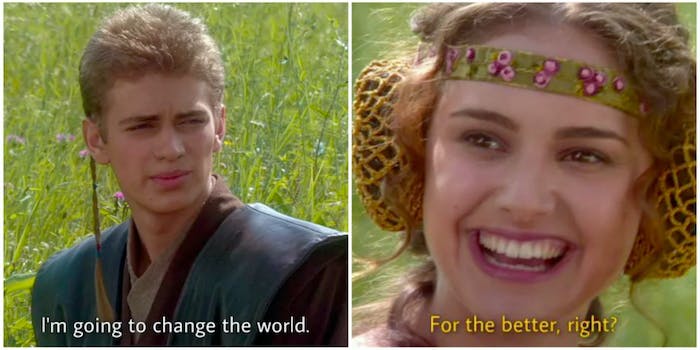 It’s probably safe to say that 2002’s Star Wars: Episode II—Attack of the Clones, the second installment of the Star Wars prequel trilogy, isn’t exactly a favorite among fans. (Though, for what it’s worth, it still beats out both The Phantom Menace (1999) and The Rise of Skywalker (2019) in terms of critical reception.) But the legacy of the film endures in a new meme that has people asking: for the better, right?

The origin of the ‘For the better, right?’ meme

The meme in question was derived from a scene in the film in which the characters Anakin Skywalker (Hayden Christensen) and Padmé Amidala (Natalie Portman) are enjoying a romantic picnic while discussing politics. Padmé, a senator for the Galactic Republic, is a bit more optimistic in the system’s ability to govern, while Anakin remains skeptical.

“I don’t think the system works,” says Anakin. When asked how it can work better, he elaborates. “We need a system where the politicians sit down and discuss the problem,” he explains. “Agree on what’s the best interest for all the people, and then do it.”

“That’s exactly what we do,” replies Padmé. “The trouble is that people don’t always agree.”

“Well, they should be made to,” Anakin interjects, worrisomely. “By whom, Padmé asks incredulously. “Who’s going to make them? You?” “Of course not me, her date retorts. “But someone. Someone wise.”

“Sounds an awful lot like a dictatorship to me,” Padmé remarks, to which Anakin says with a coy smile: “Well if it works.”

He just went and said it! Of course, as viewers know, Anakin eventually is lured to the dark side and becomes the oppressive Sith lord Darth Vader.

But even without that knowledge, RUN GIRL RUN! Having a paramour casually suggest that he’s down with dictatorship is a red flag if we’ve ever seen one. It’s like the basic moral question of whether you’d kill baby Hitler, only instead you decide to marry him in secret and bear his children.

First instance of the meme

At any rate, the general tone of the scene is pretty relatable. The first known instance of it being mined as a meme occurred on April 22nd, 2021, when redditor DaltarIT24 uploaded the following image to the r/memes subreddit. Instead of using the exact dialogue word for word, the meme summarizes the gist of the conversation.

An early example, below, jokes about Elon Musk’s rise and fall in the good favor of the internet. Another meta version riffs on the meme paraphrasing the dialogue.

After making the rounds on Reddit for a few weeks, the meme gained mainstream popularity and began to surface on Twitter. In the popular examples below, the red flags ranged from an unspecified activity that gave someone diarrhea (and was evidently worth it) to people who start new projects without finishing others first.

In many of the variations, the “For the better, right?” punchline is replaced with a caption specific to the meme itself.

One version that has gone extremely viral—gaining nearly a quarter of a million likes in two days—jokes about the shortcomings of Microsoft Word.

To be fair, using Microsoft Office is nearly as tricky as averting the rise of global authoritarianism. Even when you tell yourself that it’s for the better, right?