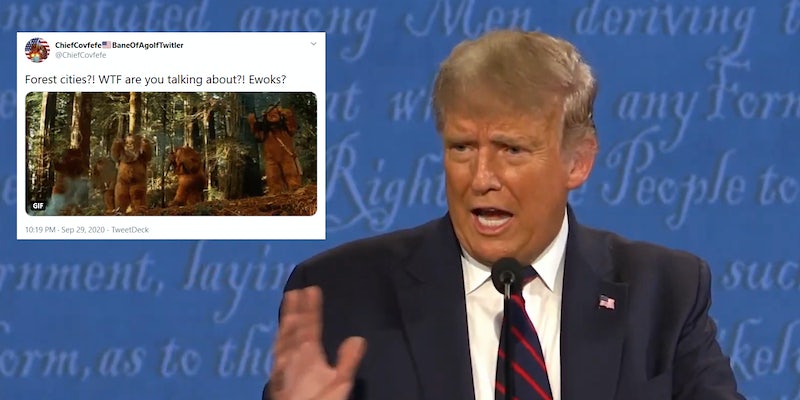 Everyone had the exact same thought.

During a discussion that was purportedly about climate change during the first presidential debate, President Donald Trump spoke about “forest cities,” leading everyone to make jokes about Star Wars.

In Return of the Jedi, the forest moon of Endor is where the Rebel Alliance lands to deactivate the shield generator for the second Death Star. The moon is also the home planet for Ewoks.

When Trump began talking about states needing better “management” for forests (something he’s brought up before) as part of a solution for climate change, he mentioned talking with the “head” of a “forest city.”

“In Europe, they live, they have forest cities, they’re called forest cities. They maintain their forest, they manage their forest. I was with the head of a major country, it’s a forest city. He said, ‘sir, we have trees that are far more—they ignite much easier than California’… I spoke with the governor about it, I’m getting along very well with the governor. I said at some point, you can’t every year have hundreds of thousands of acres of land just burnt to the ground. That’s burning down because of a lack of management.”

Trump’s mention of “forest cites” sent Twitter into an Ewok-frenzy.

You would have thought Trump’s mention of the Space Force being the thing that got Star Wars into the presidential debate discourse.