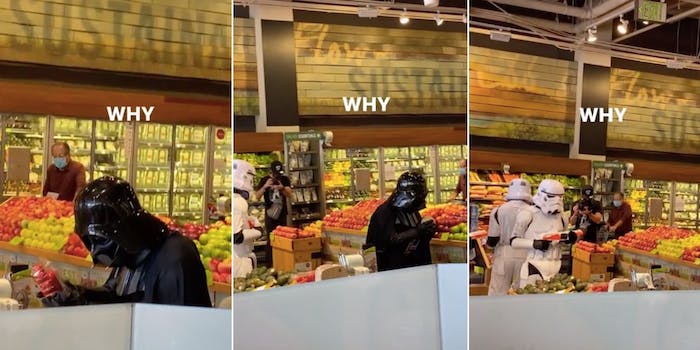 'This is not the fruit I’m looking for.'

Although the glut of anti-mask Karen meltdowns on your feeds might suggest otherwise, some people do still take public mask mandates seriously. Some might even take it too far—like the Whole Foods customers dressed as Darth Vader and Stormtroopers who went viral on TikTok this week.

TikToker Chloe Epstein (@chloe.epstein) uploaded the video of the unusual shoppers on Monday; it has since racked up more than 3.1 million views. The short clip shows Darth Vader scouring the produce section and examining an assortment of fruits. He inspects a cantaloupe and container of strawberries before forcefully ripping a plastic bag off the dispenser.

Unsurprisingly, several other Whole Foods customers film the procession, howling with laughter at the Sith Lord invading the grocery store. The Stormtroopers dutifully protect their leader, lining up in pairs from the produce section to the entrance of the store.

TikTokers had a field day in the comments.

“This is not the fruit I’m looking for,” @cozyspincake wrote, generating over 33,000 likes with a riff on the classic Obi-Wan Kenobi line.

“To the manager after not finding the grapes: ‘I find your lack of grapes disturbing,’” @isabelherar commented, appropriating a quote from Vader himself.

Epstein’s TikTok also migrated to the r/StarWars subreddit, where it has generated over 33,000 upvotes. Some users roasted poor Vader, whose diminutive stature made him look more like Dark Helmet from Mel Brooks’ 1987 space opera satire Spaceballs.

Another user imagined a scenario for Vader and created a new acronym that is sure to take off among the youth: “He heard his daughter was bringing her boyfriend to dinner tonight at Cloud City. They never call ahead smh (shake my helmet).”