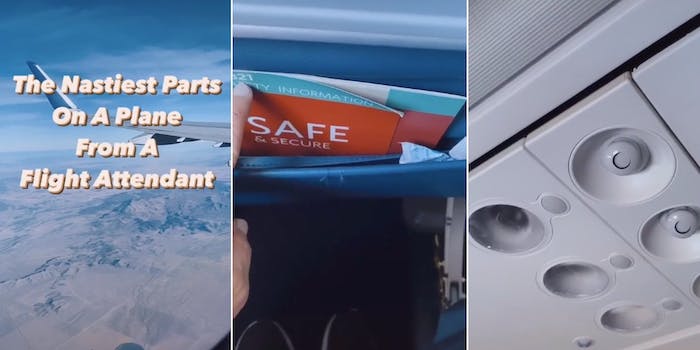 You should probably just pack some disinfectant wipes next time you fly.

A flight attendant has captivated—and perhaps appalled—TikTokers by sharing a viral video about the “nastiest parts on a plane.”

Kat Kamalani uploaded her cautionary video on Sept. 8; over the past month, it has accumulated over 1.2 million views, and likely a similar amount of horrified reactions from fellow air travelers. According to Kamalani, the filthiest parts of an airplane are the ones we often touch without a second thought. Go figure.

“First thing’s first: Do not touch the backseat pocket,” Kamalani warns. “They clean them out between flights, but they don’t sanitize them. Think of all the dirty tissues, barf bags, and garbage that has been in there.”

OK, so if the backseat pocket is a no-go, you might as well put your tray table down so you won’t be tempted to rifle through the magazines, right? Wrong.

“Next, if you’re gonna use your tray table, make sure you sanitize it,” Kamalani says. “I have seen so many parents use this as a changing table for their child’s diaper, and then they put it in the backseat pocket.”

This is all gross, and the thought of putting your hands where dirty diapers have been might make you feel like you need some air. But you should think twice before reaching for those air vents.

“Those air vents, they’ve seen thousands of hands. Wipe them down before you touch them,” Kamalani advises.

The list of disgusting airplane hotspots also includes the flight safety instructions booklet (“We don’t sanitize them, and a lot of people touch and read these to pass by time”), the bathroom door lock (“Use a tissue to lock the door”), and the seatbelt, which Kamalani lingers on before simply saying, “Yeah, just wipe it.”

Thankfully, Kamalani ends her video with one helpful, non-germ-related piece of advice. “A little tip for females: You can always find pads hidden in a compartment in the lavatory,” she says.

This isn’t the first time Kamalani has gone viral for sharing flight attendant life hacks. Her “tips while staying at a hotel” TikTok from August has racked up more than 6 million views.