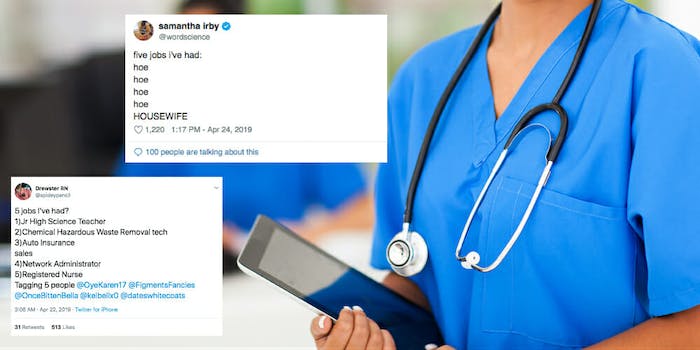 A Twitter post has inspired users to share their five most random or interesting jobs, from chemical hazardous waste removal tech to working the line at Golden Corral. But as the meme post got more popular, things started taking a bizarre turn.

People jumped in to earnestly share their own personal career journey, which besides a few odd jobs, all seemed pretty regular.

But as the “5 jobs” post got more popular, it became increasingly used for jokes and inane responses.

For example, Samantha Irby proved that yes, you can turn a hoe into a housewife. Thank you, Samantha.

And this person took inspiration from a Steve Miller Band song for his career path.

And this person may have been inspired by Meredith Brooks’ song “Bitch.”

A rundown of different sexual “jobs” was a reoccurring joke from the more provocative corner of Twitter.

The rude version of this would be to say:

but I'm not rude, I'm a very good boy, I'd never tweet such filth, and you can thank me for that pic.twitter.com/wzmsgoGyND

But the stand-out employee was this very good boy who has probably excelled at every job he’s ever held.

Five jobs my dog has had