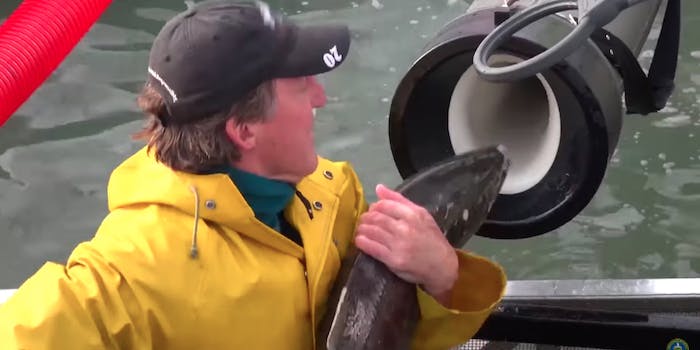 'Launch me through the fish tube so I can feel something.'

An old video of fish traveling over dams through a tube resurfaced on Twitter–and of course, in 2019, it went viral.

The clip is from a 2014 Whooshh Innovations demonstration of its volitional fish tube—properly referred to as the salmon cannon. It is a flexible pressurized fish tube, drawing fish up and over the dam so that they can travel quickly and efficiently to restore migratory patterns, according to the video, brought to Twitter courtesy of Cheddar.

Whooshh first began as a fruit harvesting company but soon moved to focus on fish. According to its website, the change was prompted by ineffective agricultural practices, which were corrected by the implementation of the tube system. Once a fish enters the tube, air pressure pushes it through at a speed of 22 mph. The fish tube also has sensors to determine what kind of fish is in the tube and how much it weighs in order to record population data and reduce invasive species.

And the memes came sliding in–almost as fast as the fish slide through the tube.

the salmon going through the giant fish tube: pic.twitter.com/UtIC7EKuc6

send me thru the fish cannon i’m so fucking tired.

everyone wants to get sucked up into the fish tube but none of you have the powerful dorsal muscles that allow the salmon to travel through it.
you would simply get stuck and die — understand this.

me waving goodbye to the fish being launched across the dam through the tube pic.twitter.com/ZnfgY8dn8s

And, if Elon Musk gets his way, humans, too, will be traveling in tubes by 2020.