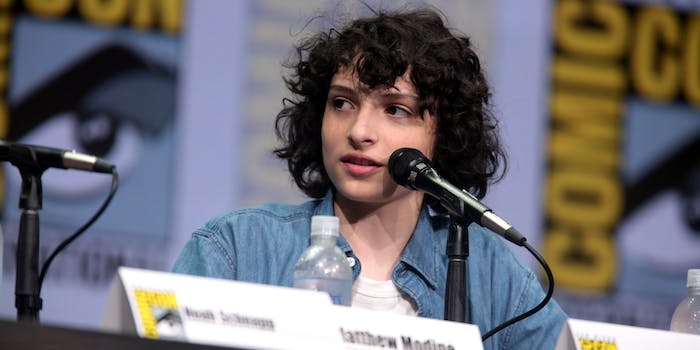 Mike, is that you?

Stranger Things has inspired a lot of memes over the hit Netflix series’ three seasons. Lately, a photo that appears to show star Finn Wolfhard (who plays Mike Wheeler) pointing a middle finger at the camera is making the rounds on Twitter. Now, it’s a meme about Mike and Eleven’s relationship.

“Strangest Thing Is I Actually Trusted That Hoe…,” user @3ngeI wrote in a tweet with a deep-fried version of the meme, and it currently has more than 100,000 likes.

In another version of the meme, user @RIPstee captioned the photo, “Got ya hoe upside down doing strange things.”

Got ya hoe upside down doing strange things pic.twitter.com/VhTTiYWIAF

We searched and could not find the source of the original photo. Nonetheless, it has become a caption contest.

As for the meme itself, that seemingly started with user @strongknockings. They tweeted, “call me kendall and kylie how pops switched up on me.”

Then, @aIexhaha responded, “don’t know about this one man.”

dont know about this one man

Next, @strongknockings replied to @aIexhaha, “you told me to tweet it.” Then, both users tweeted each other the original image of the forthcoming Finn Wolfhard meme.

A few hours later, @strongknockings reposted the image. They captioned it, “hardly know my main bitch call her my stranger ting.” Eventually, it went viral, and the Finn Wolfard meme took off.

As for whether Wolfhard has seen the memes, there’s no word on it yet. If he hasn’t, it’s probably because he’s prepping for season 4 of Stranger Things—rumored to begin production this fall.

That, or he’s just enjoying the summer like any other 16-year-old.

Either way, Finn Wolfhard is a meme now.