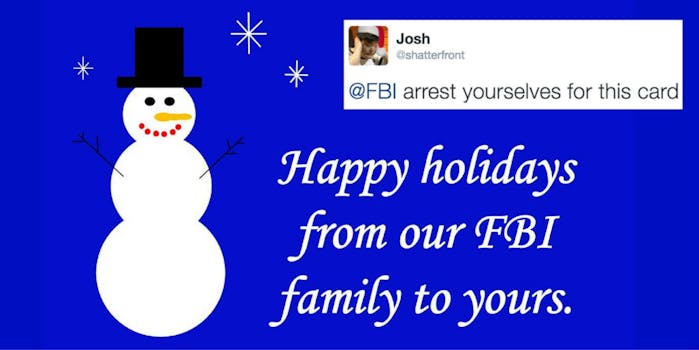 That graphic is a crime.

As the age-old adage goes, no shitty graphic shared on the internet ever goes unpunished.

On Saturday the FBI Twitter account tweeted an innocent, simple graphic of a pleasant snowman next to the message, “Happy holidays from our FBI family to yours.”

Happy holidays from the #FBI pic.twitter.com/l9VoIbQXnx

I imagine the tweet was meant to be a sweet season’s greeting between vitriolic tweets and negative headlines, a break from the bustle of shopping for presents and meal preparation.

And yes, the snowman-clad e-card did bring many a Twitter user great joy…

@ebruenig I absolutely love that an agency with millions of dollars in funding assigned this task to an intern using MS Paint.

…To roast the joke of a graphic like chestnuts on an open fire, that is.

As Twitter awoke on Christmas Eve, eager elves set their sights on the FBI’s early gift to the internet and attacked with pleasure.

we need to have the "Lucida Calligraphy" talk.

Yes, Twitter did its best to convey to the FBI just how embarrassingly horrid the sad-ass Frosty looks surrounded by those anemic, oblong snow flakes.

2) Interfere with an election and fuck up the whole world.

.@FBI Why are you letting your 5-year-old play with MSPaint on your computers? Not very secure.

Sure, a few folks took issue with the agency’s use of “Happy Holidays” over “Merry Christmas.”

Thought y'all were fighting the "War on Christmas." Focus on doing something abt Giuliani and partisanship in your organization!

Donald Trump is going to LOSE HIS SHIT when he reads "happy holidays" instead of his trademarked phrase "Merry Christmas".

But let’s be honest, we all know what the real crime is here.

Twitter truly ran amok with the “graphic design is my passion” meme on this one, too, to the point of basically hammering the last nail into the coffin and lowering it straight into the goddamn ground.

graphic design is my passion https://t.co/KVN3dzTIfE

Hi, I'd like to apply for the empty position you have in the graphic design department https://t.co/KZVRtHXV3q

is graphic design your passion https://t.co/PCPGT3tzSI

where's the graphic design is my passion meme https://t.co/CYo3Z8IfBX

Thanks for the good laugh, FBI Twitter. We know we’re gonna need it in 2017.