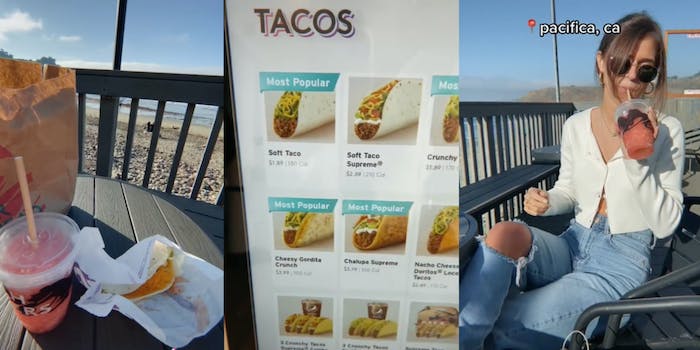 TikToker takes viewers inside the ‘nicest Taco Bell in the world’

There’s a fancy Taco Bell that a TikToker thinks you’d like to visit in California, but not everyone on the internet agrees.

The Taco Bell in question is located at 5200 Coast Highway in Pacifica, 16 miles south of San Francisco. TikToker Megan Homme lauds it in a video that’s received more than 215,000 likes since she posted it Wednesday.

It starts with a walk up to the exterior of the oceanside fast-food restaurant, with a graphic stating, “I visited the (bougie) beach taco bell.”

Homme begins by saying, “So, I recently visited what is known as the nicest Taco Bell in the world, which is on the beach in Pacifica, California. There’s a spot to leave your surfboard on the outside of the building, and also the cutest little walk-up window for customers with sandy feet.”

As the camera pans from the exterior to the interior, you can hear a classical music track in the background to further “class up” the tour.

“They have a nice counter to order from, but we use these walk-up ones,” Homme continues, showing her punching a taco order into an electronic touch-pad kiosk.

She continues, “They have this full alcohol menu. You could literally add alcohol to pretty much any drink in the Taco Bell—and shots.”

The video then takes Homme and her companion to an outdoor deck at the Taco Bell.

“The best part is their patio in the back, which is literally right on the sand. The views are incredible, the tacos are amazing, you can just sit here and watch the surfers … literally 10 out of 10.”

Part of the video’s popularity is attributable to Barstool Sports boosting it in a tweet, though at least one commenter didn’t appreciate the signal boost, saying, “Quit making this Taco Bell popular. The weather is trash, the alcohol slushees are overpriced and Pacifica is a shithole.”

Responses to Barstool also highlight the recordscratch moment that was “the tacos are amazing.”

Though there’s been a recent rush online to celebrate (or otherwise) the Pacifica Taco Bell, it’s been tweeted about for years.