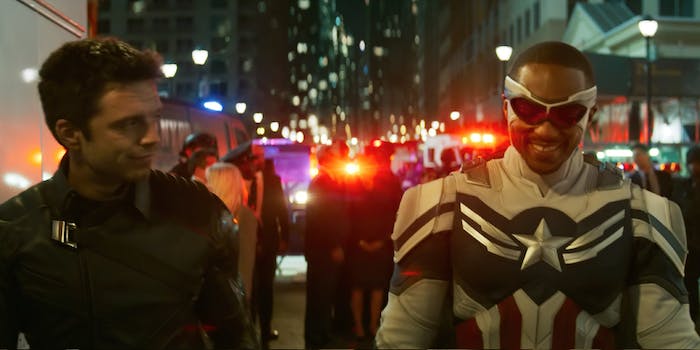 As The Falcon and the Winter Soldier drew to a close, more and more viewers bought into a peculiar fan theory: that the show initially included a pandemic-related subplot, but that storyline was removed in post-production. This provided a neat explanation for some of the frustrating plot holes in the final product. Now, the show’s head writer has confirmed there was a “lost” storyline—but it didn’t include a pandemic.

In an interview with the Fade to Black podcast, head writer Malcolm Spellman was asked about this fan theory. “I’ve been told to stop saying that,” Spellman joked, referring to conversations about a deleted storyline. “But I loved it… It had nothing to do with the pandemic… I want to see if we can get some writers in and do a book run on it.”

That’s an interesting postscript to the “lost storyline” theory, because the pandemic element was plausible. The Falcon and the Winter Soldier includes some puzzlingly unfinished ideas regarding the Flag-Smashers distributing vaccines, and if this did originally involve a pandemic, it might make sense for Disney to nix that idea due to Covid-19. But with Spellman saying the storyline had nothing to do with a pandemic, well, why was it deleted?

As many people have pointed out, the show’s Flag-Smasher subplot was bafflingly disjointed. Other elements of the show held together quite well (albeit with some rather incoherent politics), but it definitely felt like there was something missing from the Flag-Smasher arc. Maybe we’ll learn more if Spellman gets his wish and Marvel publishes a comic covering that lost storyline, but until then, this creates a more puzzling mystery than the original fan theory.

It also highlights the unusual creative structure behind these Marvel/Disney+ shows. Obviously all TV creators must strike a balance between their own goals versus input from network executives. But with the MCU, screenwriters work within a similar system to Marvel comics creators, hired to tell a specific story for a character who doesn’t belong to them and is ultimately controlled by the Marvel brand.

That’s why writer/producers like WandaVision‘s Jac Schaeffer and The Falcon and the Winter Soldier‘s Malcolm Spellman are often referred to as “head writers” instead of the more traditional term “showrunner.” They lead the show’s writing team, but if a Marvel bigwig like Kevin Feige says a certain storyline needs to be deleted, then that’s what happens. Similarly, Spellman makes it clear—in a lighthearted manner—that he’s not really allowed to talk about what happened behind the scenes. For now, fans will just have to keep floating their own lost storyline theories.