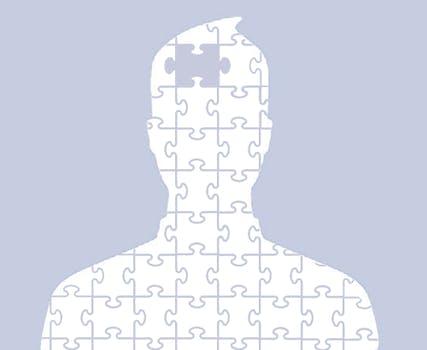 Researchers have found a strong correlation between symptoms of schizotypy and particular types of Facebook postings.

Facebook is designed to capture the story of our lives. Our friends, important life announcements, our interests, reading habits, and shared viral videos: It’s all there—a digital thumbprint of how we spend our time online.

Researchers at the University of Missouri believe that activity “Reveals Clues to Mental Illness.” According to a recent psychological study published in the journal Psychiatry Research, researchers found high levels of correlation between peoples’ questionnaire results and Facebook activity, leading them to conclude that Facebook postings can reveal a variety of symptoms.

“Some study participants showed signs of the schizotypy condition known as social anhedonia, or the inability to experience pleasure from usually enjoyable activities, such as communicating and interacting with others. In the study, people with social anhedonia tended to have fewer friends on Facebook, communicated with friends less frequently and shared fewer photos.”

Elizabeth A. Martin, a doctoral student at the University of Missouri and lead researcher on the study, said that she and her fellow researchers gave a questionnaire to 212 college freshmen, all psychology students. They were then asked to show their Facebook pages to the researchers; all but two of the students did so. Martin found a strong correlation between symptoms of schizotypy (a sort of spectrum straddling the line between normal and schizophrenic) as indicated on the questionnaire and particular types of Facebook postings.

Martin said she’s interested in how Facebook could help therapists help their patients. People’s memories are often faulty; Facebook posts, by contrast, can provide a diary-like record into people’s thoughts, connections, and emotions. The posts could also give a therapist a window into how a patient casually acts, outside of their appointment.

But how useful is a Facebook-only study for measuring things like social withdrawal? If, for example, people start posting less, couldn’t that simply suggest they’re too busy socializing in real life to hang out on Facebook?

Martin specified that the study was not simply measuring amounts of Facebook activity. “They’re not necessarily using Facebook less, they use it differently,” she said. “Odd beliefs, delusional beliefs.”

Lots of popular conspiracy theories sound pretty delusional, though. The late, unlamented Mayan apocalypse, various right-wing or left-wing political conspiracies—are those the sort of beliefs the study’s talking about?

“No,” Martin said. “People who are very right-wing, very left-wing, that’s half the country.” A given conspiracy theory might have thousands, even millions, of believers; it’s a belief shared by many people, not a unique viewpoint one person invented on his own.

So what sort of delusional beliefs were Martin and her fellow researchers looking for? “Seeing connections other people don’t,” she said. “Believing your body is fundamentally different from everyone else’s, you’re not feeling the same sensations other people feel.”

“Like, two of your friends posted about the same thing, they must be talking about you,” offered Martin by way of example.

This is hardly the first study to tackle Facebook activity. Previous efforts have concluded that the social network is making us more self-indulgent and better connected with our families but also potentially damaging our self-esteem.