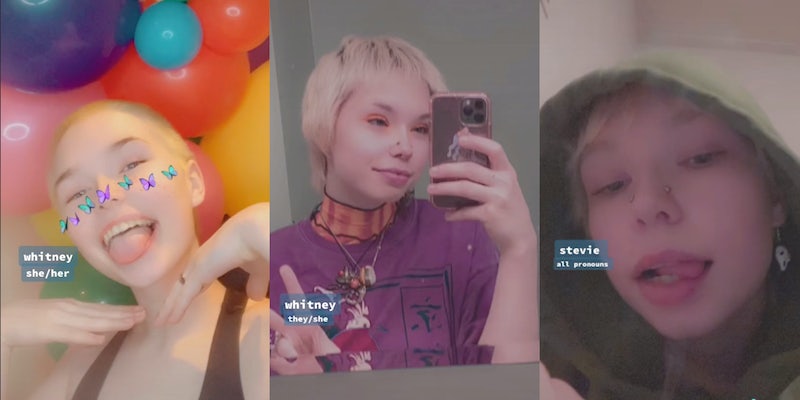 The 19-year-old noted that someone 'sent (them) an article of (their) biological dad's death.'

Eminem’s child, Stevie Laine, is all over the news recently.

The 19-year-old made headlines last week after they posted a TikTok announcing their pronouns, which they announced are “any pronouns” in an Aug. 6 video. Now they are back in the news, thanks to yet another upload to the video-sharing platform, this time with sights set on their family.

Stevie’s first headline-making TikTok saw them cycle through months worth of selfies as they “become more comfortable” with themselves. The montage sees Stevie transform from “Whitney,” the name they were given at birth, and gradually move away from traditional femininity into a style that suits them more. This TikTok seems to have opened the door for Stevie to feel more comfortable discussing sensitive topics online, and paved the way for a video that appears to put the young creator’s family on blast.

The TikTok, which has since been deleted, saw Stevie delve into their reaction to learning they were adopted. The clip used text overlay to reenact a conversation between Stevie and their family.

Using quotes, Stevie displayed a sentiment they must have heard frequently in recent months: “He’s not your real dad. You’re adopted.” The quotes appear to reference Eminem, who’s real name is Marshall Mathers.

This was news to Stevie, according to the TikTok, who responded with initial denial. “No, he is my real dad,” they stressed. “You’re my real dad, right? Am I adopted?”

Eminem denied this claim, according to Stevie, stressing that he is, in fact, Stevie’s “real dad.” Then, Stevie reportedly noted that someone “sent an article of my biological dad’s death,” seemingly confirming rumors of Stevie’s adoption. The article also displayed Stevie’s biological grandma. The video concluded with a note that “I’m sorry they wouldn’t tell you about him.”

Stevie’s biological father, Eric Hartter, reportedly passed away in 2019. He was a tattoo artist and the former boyfriend of Stevie’s mother, Kim Scott. Stevie was legally adopted by Eminem in 2005, but this news apparently never reached Stevie. In fact, the TikTok appears to suggest that the knowledge was purposefully withheld from Stevie, who was forced to discover proof of their true parentage online.

Stevie still appears to have the support of their sister, Hailie Jade, who is Eminem’s biological daughter. Hailie liked Stevie’s “transformation” video, and seems to keep an eye on what her little sibling is up to online. Eminem and Scott share another adopted daughter, Alaina, the daughter of Scott’s late sister Dawn. Dawn passed away due to a drug overdose in 2016, and the couple adopted Alaina into their family.

The Daily Dot reached out to Eminem and Stevie for comment.

This article has been corrected to reflect that Eric Hartter passed away in 2019.