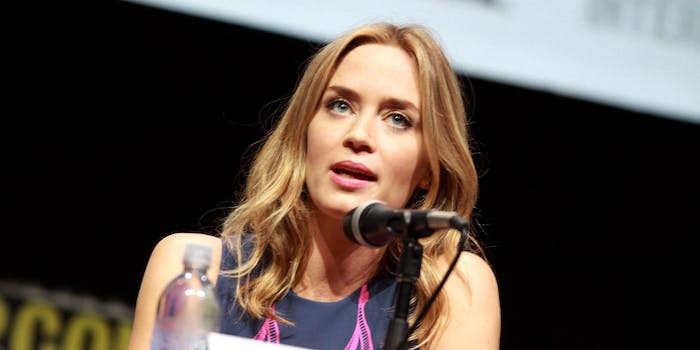 The actress lost her patience after being asked about 'Fantastic Four.'

Movie press junkets are kind of a nightmare. Entertainment reporters are herded into a room like cattle, interviewing actors who have probably heard the same questions 20 times already. Everyone wants a scoop and/or a brief flash of human connection, but the most viral moments generally involve celebrities acting out because they’re bored. This week, that person was Emily Blunt.

In a five-second clip from the A Quiet Place II press tour, Blunt gets uncharacteristically snippy. “You know I’ve done three interviews and everyone’s asked me that,” she says, when the interviewer asks her if she’s in the new Fantastic Four reboot. Needless to say, this topic has nothing to do with A Quiet Place II.

A lot of Marvel fans want Blunt and her husband John Krasinski to star in the next Fantastic Four franchise, to the point where some people believed Krasinski had a secret WandaVision cameo. However, Blunt has made it clear she’s not interested in superhero movies. There’s no evidence that she’s attached to a hypothetical Fantastic Four movie, and even if she was, she wouldn’t announce it while promoting a totally different film.

This whole situation is shaped by what kind of quotes go viral online. And it’s awkward for everyone involved. No journalist dreams of asking this kind of stupid question, but “Emily Blunt Responds to Fantastic Four Rumors” is a headline that gets clicks.

Even in lengthy magazine interviews with A-list actors, the attention-grabbing moments often involve throwaway comments about Star Wars and Marvel. In the end, that’s what people are interested in reading. So this probably won’t be the last time Emily Blunt gets asked about the Fantastic Four.