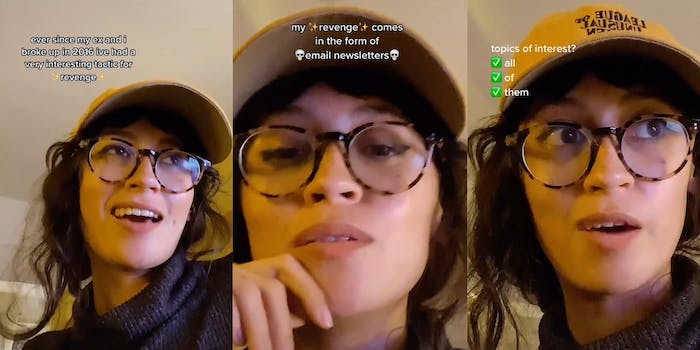 ‘This is so petty, I love it’: TikToker’s 5-year-long revenge on her ex-boyfriend divides viewers

'I will never stop doing it.'

When TikToker @andpacker asked people to share “something incredibly immature that you will never stop doing” Kristina, who goes by @kristinamakescontent on TikTok, had an answer that is being lauded by some and criticized by others.

For the last five years, Kristina says she has used her ex-boyfriend’s email to sign up for literally every mailing list and subscription she can find, and, she says, she has no intention of ever stopping.

Any time there’s a free service that isn’t really free—in which the payment is one’s email so it can be spammed it with promotions and nonsense—she simply uses her ex’s email instead of her own. Airport Wi-Fi, online articles, newsletter subscriptions all go to the same man, who she says has no idea that she’s the one doing it to him.

As many pointed out in the comments section, that’s probably not going to be true for much longer. After her TikTok garnered 4.3 million views, there’s a good chance it’s going to be seen by her ex.

Some viewers are criticizing the extent of Kristina’s revenge, with one saying, “Tell me you didn’t get over your ex without telling me” and another saying, “5 years later.. move on love.”

Others think it is brilliant, even sharing their own similar strategies for getting back at their exes in the comments. “I used to hand out his business cards to everyone,” one user revealed.

And some are both impressed and horrified.

“This is so petty, I love it,” another said.

It’s unclear what her ex did to merit this level of punishment. While Kristina closed the video by saying that she will “never stop doing it,” she later clarifies that “convenience,” rather than revenge, is a better word for what she is doing. So whether or not he truly deserves this treatment, or if Kristina is just a diabolical yet practical person, remains to be seen.

The Daily Dot has reached out to Kristina.