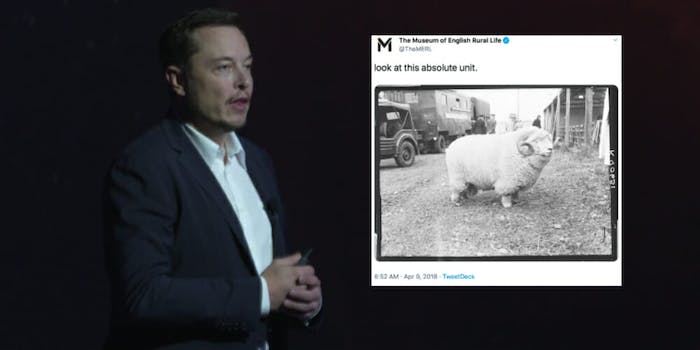 In April, Musk changed his Twitter avatar to a sheep.

So I have more news:

I'm no longer moving to the Royal Academy.

Instead, I'll be Tesla's Social Media Manager from July.

The two accounts fully committed to the swap. Musk changed his bio to “absolute unit” at the time. The museum also changed its name to “The Muskeum of Elonglish Rural Life,” a reference to another meme about Musk.

Switched souls with The Museum of English Rural Lofe https://t.co/X41ZWc9sip

Adam Koszary first tweeted out the ram photo and referenced a meme on the museum’s Twitter account in 2018.

Koszary was referring to the “absolute unit” meme, which was born on Twitter in 2017. A Twitter user posted a photo of hotel manager David Morgan-Hewitt next to Queen Elizabeth.

“In awe at the size of this lad. Absolute unit,” the user wrote at the time.

The meme, which references anything large and impressive, took off from there.

The MIT Technology Review posted a photo of “the world’s biggest airplane,” Stratolaunch, calling it an “absolute unit.”

Look at the size of this absolute unit. https://t.co/4Fj2n6rNQl

Musk’s SpaceX once had a partnership with the company behind Stratolaunch regarding the plane.

Musk responded to the MIT Technology Review’s tweet by writing, “I’m an absolute unit too,” with a photo of the ram from the museum’s initial post.

I’m an absolute unit too pic.twitter.com/Rf0BTJmeEN

After a nudge from his Twitter followers, Musk then changed his photo to the ram.

The two accounts not only swapped avatars but a series of jokes as well.

You can fire the winner into space

Now Koszary will continue to enhance memes at the memelord’s company in July.

My Twitter is pretty much complete nonsense at this point

The Daily Dot has reached out to Adam Koszary.