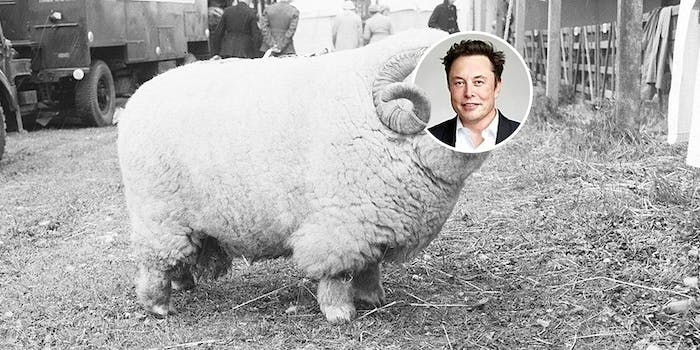 Here’s why Elon Musk is a sheep on Twitter

It's all fun and games until some poor sheep ends up getting shot into space.

Switched souls with The Museum of English Rural Lofe https://t.co/X41ZWc9sip

To understand how we got here, you have to understand Elon Musk’s unique personality, know a little something about memes, and a bit about the politics behind aerospace technology.

Don’t worry, we’ll get there.

A little over a year ago, MERL tweeted out a picture of a gigantic wooly sheep, along with the caption: “Check out this absolute unit”.

This was a reference to the “absolute unit” meme which started with a picture of British hotel owner David Morgan-Hewitt and has since come to mean anything large and impressive.

Fast forward to Wednesday when MIT Technology Review tweeted a link to their article about Stratolaunch, the world’s largest plane (by wingspan).

Look at the size of this absolute unit. https://t.co/4Fj2n6rNQl

This seems a bit like cheating as Stratolaunch appears to be two planes duct taped together, but be that as it may, the important thing is that the publication captioned the tweet, “Look at this absolute unit.”

Here’s where Musk gets involved. The massive plane was designed to launch spacecraft from the air, so of course, Musk’s company SpaceX was involved… at first. The Startolaunch project was started in 2010 and its relationship with SpaceX was terminated in 2012.

“SpaceX was a partner, and like a lot of partnerships, it was just determined that it was best we went our separate ways—different ambitions,” Charles Beames, who at the time was the president of the company which built Stratolaunch, told Spaceflight Insider. “We were interested in their engines, but Elon and his team, they’re about going to Mars, and we’re just in a different place, and so I think it was a parting of the ways that was amicable.”

Amicable or not, Musk decided to respond to the tweet about Stratolaunch in way that wasn’t exactly aggressive but was perhaps a bit cheeky and possibly even mocking.

I’m an absolute unit too pic.twitter.com/Rf0BTJmeEN

It’s unclear if Musk is referring to himself as an absolute unit. Musk considers himself to be a something of meme lord, so that might also be part of what’s going on here.

Musk’s fans enjoyed the joke(?) on Twitter and one man even encouraged him to make the sheep his profile picture. Musk was happy to oblige.

Naturally, this came to the attention of MERL, who are pretty into memes themselves. The museum chose to respond in kind, changing their profile picture to a photo of Musk.

Two can play at this game pic.twitter.com/pNbcOkXTZ7

After a fan suggested it, they also updated their name to “The Muskeum of Elonglish Rural Life”, a reference to the Elongated Muskrat meme, which people on Twitter jokingly insist is Musk’s full name.

The change has provided seemingly endless joke fodder to MERL and the rest of Twitter for the past two days.

You can fire the winner into space

Next step, The Museum of Mars Rural Life https://t.co/ZiIoSR7uMc

This includes people pretending to mistake MERL for the actual Elon Musk and reaching out to ask for jobs.

So there you have it. That’s how a billionaire, a giant airplane, a small British museum, and large sheep got mixed up on Twitter. The only question left to answer is whether or not this is all going to result in a sheep getting launched into space.

Turns out our wooly friends have nothing to worry about.